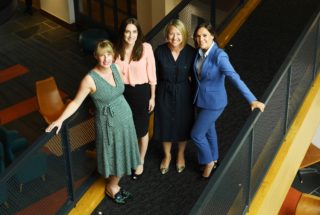 The first WeQual awards have been launched this year to recognise women one level below Executive Committee in FTSE 350 companies.

Helping to drive equality in the hospitality industry, Marston’s has seen four of its female senior managers named as finalists in the first ever WeQual Awards, recognising the contribution that women make at ‘ExCo minus one’ levels in businesses and aimed at tackling slow progress in appointing women in FTSE 100 and 250.

The four Midland based finalists all work in senior management roles across different areas of the FTSE 350 business and include:

Maria Franklin, Head of HR Business Partnering, said: “It is such an honour to be named alongside three of my colleagues as finalists in the WeQual awards. This is a great opportunity to be at the forefront of change and I am so proud to be standing amongst some amazing women doing incredible things in business.”

Ralph Findlay, CEO of Marston’s added: “Marston’s has always strived to push the boundaries in not only business but also in cultural change. We are really proud to be one of two companies to have four finalists – that is a real testament to the work and commitment shown by Nicola, Maria, Sharon and Amelia and I wish them all the luck at the awards.”

Judged against six attributes: drive, leadership, integrity, self-confidence, cognitive ability and knowledge of the business, the finalists have shown not only a personal career commitment but also an invested interest to grow the representation of women at executive level. Their entries were also marked blind with no name or company revealed.

As revealed by the government-backed Hampton-Alexander Review, the need for change is still apparent as despite growing calls for change, women still only represent 25% of the Combined Executive Committee and Direct Reports across the FTSE 250. A majority (60%) of new appointments to senior roles continues to be men*. Whilst the Review is a birds-eye view of the entire corporate industry, Marston’s continue to be one of the key drivers in the industry that champion the equality of women and are proud of where the company stands following ongoing internal reviews and a public deep analysis of Gender Pay Reporting.

The winners will be announced at the award’s dinner on the 26th September. Hosted by Sandi Toksvig OBE and with Dame Inga Beale as guest speaker the awards will host 300 senior executives and will be the first awards of its kind to be held.

Founder and CEO, Katie Litchfield, launched the WeQual Awards to help aspiring women in business make that final step to the ExCo, and plans to bring the awards to other markets.

Having worked alongside FTSE 100 senior leaders throughout her 18-year career at the Financial Times, Katie has witnessed first-hand the challenges companies are facing in developing people into senior roles.

The WeQual Awards have been created to identify and recognise world-class female executives one level below the executive committees (ExCo) in businesses across the FTSE.

The awards aim to go further than current targets for female representation at the top of businesses, driving a change in the ExCo appointment rate from 30% to 50% women, recognising women reporting into the Executive Committee and proving to the business world that they can make at least as important a contribution as the man next to them.

(* member of the WeQual Advisory Board)