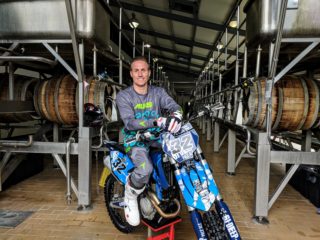 A Marston’s trainer will be championing Marston’s 61 Deep Pale Ale as he competes in the current Motor Cross season.

His 2017 KTM 350 sxf modern Motor Cross bike has been emblazoned with the distinctive 61 Deep graphics across its body work to promote the brand and reach a new audience of drinkers.

Adam Jones, from Kidderminster is a Front of House trainer for destination houses with Marston’s Inns and Taverns. He is a qualified NVQ assessor with teaching qualifications and has been working for Marston’s for two years.

He has had a passion for motor bikes for as long as he could remember that has dominated his life. Riding motor bikes before he was ten years old, he got into serious Motor Cross Racing as a teenager, reaching expert pro level. He competed in national and international competitions across Europe for a number of teams including Yamaha, Honda and Suzuki until a bad injury attempting a 150-foot jump put an end to his pro career at 24 years of age.

He got back on a bike again within a year and maintains his passion at the weekends as an independent competitor when he can. What’s more, he uses his experience in the Motor Cross world in his Marston’s training as an example of great team work.

Adam said: “It’s great to sign a promotion deal for my bike with the company that I work with. Marston’s are keen to see if it creates any new opportunities and drinkers for the 61 Deep brand and I am thrilled and proud to be representing my employer with one of my favourite beers!”

Elliot Allison, Brand Manager for Marston’s beers added: “We were excited to hear about the opportunity with Adam’s bike and really enjoyed it when he brought it to the brewery. Our head brewer Pat McGinty said he was terrified to even sit on the bike so we take our hats off to Adam and his fearlessness!

Adam is competing in the current Motor Cross season on the bike and his next competition will be on 19th August at a WWMX event at Hazeley Grange near Kidderminster.

Marston’s 61 Deep is a refreshing 3.8% abv pale ale made with five American and Australian hops that give it its fresh zesty aroma whilst the tropical and citrus notes make it extremely drinkable.