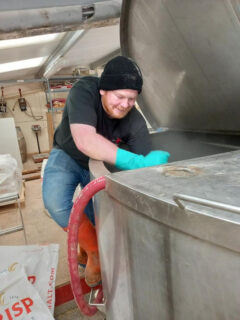 McColl’s Brewery has appointed Simon Whittington as the new Head Brewer for the County Durham-based craft brewery. Si joins McColl’s after a short spell as Head Brewer at Durham Brewery, with the majority of his career prior to this at Camerons Brewery in Hartlepool.

Si started as a lab technician at Camerons, before moving into production and packaging, and then leading the development of nano-brewery Tooth & Claw Brewing. He joins McColl’s with a wealth of quality control and assurance knowledge, which has been at the heart of plans for McColl’s to improve on everything they do.

The plan is to break down the current core and seasonal ranges and dive into the technical side of each beer. Once this work is completed, the brewery will have an amazing base to then start releasing more specials and pushing boundaries (and themselves).

Si says –“With QA at the forefront, we are looking at the way we brew and ferment depending on the final packaging method.  We’re focusing on water, grist bills, hop usage and yeasts, not only as raw ingredients but how we use and process them.  There are lots of controls and background stuff that has already been identified and once in place will elevate our beer to the next level.  We’re fortunate to have really good equipment and a shared passion for beer, now it’s time to work on the amazing foundations that Danny has laid and get stuck into the nitty-gritty.”

Looking to the Future

Danny McColl, Co-owner and Head Brewer at McColl’s Brewery said – “It’s been a long time thinking, but with the appointment of Si as our Head Brewer it genuinely marks a significant point in McColl’s Brewery development. Alongside other substantial process and equipment investments (less sexy than fresh, wacky beers or collab shout outs) Si is here to strip the brewery back to basics and build foundations of quality and consistency to ensure bloody tasty beer is what people get from us. The next few months will see significant development in our current beers, elevating their character and profiles and nailing the best means of packaging and dispense. No more jack of all trades, more pitch-perfect precision.”

McColl’s Brewery is really excited about creating and sharing the future of the brewery. Something Danny has found himself repeating to trade and retail customers time and time again over the past few weeks is “demand and expect more of our beers….things will only get better.”

McColl’s Brewery is also proud to announce that they have now reached the £2,000 mark in their target to raise money for Men’s Pie Club (MPC) to help tackle social isolation in men across the North East of England.

The North East craft brewery collaborated with MPC late last year to brew a traditional bitter (with a twist), with £1 from every can of beer sold being donated to the club. They hope to raise £2,500 in total, which will enable Men’s Pie Club to continue their great work.

Men’s Pie Club is about local guys, making pies. Supported by Food Nation, a social enterprise based in Newcastle, MPC was developed in response to the need for increasing levels of social connections and feelings of belonging for men in the North East of England.

ENDS
Based in County Durham, Daniel and Gemma McColl launched McColl’s Brewery in spring 2017. Inspired by traditional British, Belgian and new wave beer styles they look to create beers that everyone can enjoy.