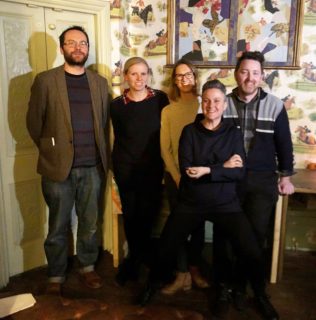 With no and low alcohol beers growing by 150% over the last four years (CGA), it was no surprise that the Guild’s recent seminar on the subject was a sellout, as individual and corporate members packed the Commercial Tavern in Shoreditch to hear from a handful of experts and sample a range of beers.

Gemma Catlin, buyer at City Pub Group, whose non alcoholic beer offer grew from 4% to 6% of PPL between 2017 and 2018 and has been an important part of the group’s policy of inclusivity.

Becky Kean, founder of FitBeer, who explained their approach of creating a great beer that happens to be alcohol free. FitBeer highlight the beer’s positive qualities rather than the ‘without’ : all natural, vitamins, isotonic and low calorie.

Rob Fink of Big Drop Brewery, who have one of the biggest ranges in the low/no sector. Rob explained that he created Big Drop after giving up alcohol himself and despairing of the non-alcoholic drinks offer.  He highlighted how no/low beers were helping to keep pubs alive as a growing number of people choose not to drink alcohol, and finished by asking writers in the audience to ‘call out’ the bad beers in the sector and praise the good ones to improve its overall quality as it grows.

Finally, Fergus Fitzgerald, Adnams head brewer, talked about the development of low/no alcohol beers at the brewery, in particular Ghost Ship no alcohol, produced through the reverse osmosis process. The beer has been a huge success and is the biggest seller on the Adnams website.

After the presentations and discussion, Guild members enjoyed sampling beers from several brewers.

Thanks to Guild director Natalya Watson who organised the event, to all speakers and brewers.