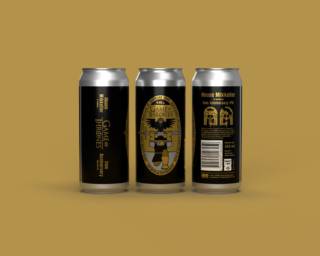 On the occasion of the acclaimed HBO series’ 10th anniversary, Warner Bros. Consumer Products and Danish craft beer company Mikkeller have joined forces to celebrate the Iron Anniversary and launch a range of Game of Thrones inspired beers. The multi-year partnership will let fans all over the world celebrate one stein at a time.

Game of Thrones has aired in over 207 countries and territories and amassed millions of fans, and over its eight seasons the show has taken the throne as ‘the world’s largest TV series’. April 17, 2021, marks ten years since the world became acquainted with the series’ unique universe, and in celebration of this milestone fans can celebrate with the launch of the beer ‘Iron Anniversary IPA’. The IPA is only the first of a series of Game of Thrones beers from Mikkeller to be brewed.

“From the very beginning, collaborations have been one of the key elements in Mikkeller’s universe and are one of the things we have the most fun with and love the most. We have done a lot of them, but this is without a doubt the biggest so far, and we are extremely proud and happy to get this opportunity. We are looking forward to brewing a lot of fantastic beers and sharing them with the series’ dedicated fan base and other beer lovers,” says Mikkel Bjergsø, Founder and Creative Director of Mikkeller.

A “HAZY” COLLABORATION
The creation of the ‘Iron Anniversary IPA’ has exceeded all expectations.

“The first step of the collaboration involved creating a beer label that elegantly merged Game of Thrones’ unique universe with Mikkeller’s more lighthearted and colorful expression. We think it has succeeded really well, and we are very pleased with the result,” Mikkel Bjergsø explains.

Mikkeller’s art director, Keith Shore, designed the label. Since 2010 he has designed and illustrated for Mikkeller playing a defining role in the establishment of the beer company’s visual identity.

‘Iron Anniversary IPA’ is a New England IPA – also called NEIPA, hazy or juicy IPA due to its unfiltered appearance and significant amounts of hops that give it a fruity aroma.

This relatively new style of beer is expressive without being too extreme, and has been much hyped among microbreweries and beer enthusiasts in recent years.

Plans are already underway to launch two more beers in 2021 with several more Mikkeller Game of Thrones inspired beers over the next few years. Mikkeller’s plan is to draw inspiration from the rich Game of Thrones universe and brew a series of beers that adds to the brewery’s versatile repertoire, including lagers, IPAs, spontaneously fermented beers, stouts and non-alcoholic beers. Some releases will be wide launches; with a few releases being highly limited productions using exclusive ingredients and processes. In addition to the beers, fans will also be able to purchase a range of merchandise from Mikkeller inspired by the series.

The first release ‘Iron Anniversary’ will be available exclusively to the UK on-trade via independent distributor, James Clay and Sons.

Future releases from the series will be available through Mikkeller’s global distribution network, including independent and premium national retailers.

ABOUT MIKKELLER
Mikkeller is the adventurous story of a beer loving Danish math- and physics teacher, who started experimenting with hops, malt and yeast in his small kitchen in Copenhagen. Today he exports his craft beer to 50 countries, with just as many Mikkeller locations around the Globe. His inventive and constant development of Mikkeller has resulted in a brewery internationally acclaimed for innovation and quality. A Key element of Mikkeller’s brand is collaboration. From world remowned Michelin restaurants and other amazing breweries to design brands, wineries, artists and rock stars, we pride ourselves in working with the best of the best. Previous collaborations include David Lynch, B&O, The Danish Refugee Council, The National, Rick Astley, Scandinavian Airlines, Mastodon, Uerige, Gaffel, Noma, El Cellar de can Roca, Weingut Meierer, Burger King and many more.

ABOUT WARNER BROS. CONSUMER PRODUCTS
Warner Bros. Consumer Products, a Warner Media company, extends the Studio’s powerful portfolio of entertainment brands and franchises into the lives of fans around the world. WBCP partners with best-in-class licensees globally on an award-winning range of toys, fashion, home décor, and publishing inspired by franchises and properties such as DC, Wizarding World, Looney Tunes, Hanna-Barbera, HBO, Cartoon Network and Adult Swim. The division’s successful global themed entertainment business includes groundbreaking experiences such as The Wizarding World of Harry Potter and Warner Bros. World Abu Dhabi. With innovative global licensing and merchandising programs, retail initiatives, promotional partnerships and themed experiences, WBCP is one of the leading licensing and retail merchandising organizations in the world.