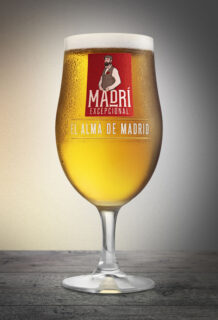 Molson Coors Beverage Company (MCBC) has announced its first collaboration with the La Sagra Brewery, based near Madrid, with the launch of Madrí Excepcional – a new modern European-style lager.

Madrí Excepcional will be available exclusively on draught in on-premise venues across the UK from 19th October and has been designed to capitalise on the fast-growing World Lager category, which now makes up 24% of the lager market in the UK. It has also been the fastest growing sub-segment of the beer category since venues reopened following the national lockdown.[i]

Madrí Excepcional aims to capture “El alma de Madrid” or “The Soul of Madrid” and has all the taste characteristics of a modern European-style lager. The crisp, clean and refreshing liquid is full of flavour and aroma at 4.6% ABV, with a light golden colour and a smooth, well-rounded taste profile with a short bitter finish.

Its branding is inspired by the term “Chulapo” – originally a group of people in Madrid during the 19th century who were famous for their elaborate style of dress and cheeky attitude. Today, the term is often used to refer to people from Madrid and this sense of style and attitude that lives on in the city. Madrí Excepcional embodies this sentiment by bringing together traditional and modern brewing techniques to produce a great tasting fusion beer.

Carlos Garcia, Founder and CEO of La Sagra Brewery, said: “La Sagra is founded on taking the best of the diverse cultures that surround us and applying innovative brewing techniques to create great tasting beers that stand out from the crowd. These principles are shared by Molson Coors and by working together we’ve created something really special in Madrí Excepcional, a unique fusion of the Chulapo way of life and British brewing heritage.”

Ryan Mcfarland, Regional Business Director, Western Europe at Molson Coors, said: “We’re so excited to be bringing this great collaboration with Carlos and the team at La Sagra to UK drinkers. In these incredibly challenging times for the hospitality sector we’re continuing to invest in the future and support our customers with innovative new products which will encourage people to visit pubs and bars when they’re able to do so. World Lager is now the second biggest sector of the lager category in the UK, making up almost one in four pints of lager consumed. Madrí Excepcional provides a new and unique option in this category for pub and bar operators and we’re confident will be a huge hit with consumers.”

Madrí Excepcional will initially be exclusively available to the On-trade and Molson Coors aims for it to be available in outlets across the UK by the end of 2021.

Situated between Toledo and Madrid, La Sagra sits in a unique area of Spain, which is historically a melting pot of different cultures and tastes. This philosophy of “fusion” has been integral to the creation of Madri Excepcional.

Carlos Garcia grew up on the outskirts of Madrid and after seeing first-hand the central role that beer plays in Spanish custom & lifestyle he began to sell craft beer. This ultimately led him to establish La Sagra, a young, innovative brewery, with a passionate team of beer lovers brewing exceptional quality Beers, leading an unstoppable beer movement in Spain & beyond!

Press release from Citypress on behalf of Molson Coors