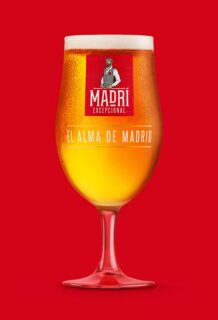 Madrí Excepional, Molson Coors Beverage Company’s first collaboration with Madrid’s La Sagra Brewery, is celebrating a successful first year of trading in the UK and Ireland and has announced a raft of new distribution points across major venues.

The modern-European style lager, which launched in the UK and Ireland in October 2020, has now been installed in more than 4,000 outlets and has more than 500 installs in the pipeline over the next month[2]. It’s also proving hugely popular with consumers as hospitality venues reopen; it has already established itself as one of the top ten world lager brands on draught in the on-trade by sales value since the reopening of indoor hospitality[3], with the second-highest rate of sale in the category[4].

The beer has also earned widespread industry recognition and acclaim, earning a silver medal in the lager category at the prestigious World Beer Awards earlier this year.

The fast-growing world beer category was the best performing sector in the on-trade during 2020/21[5], and now accounts for more than a quarter of draught lager sales in terms of volume[6], up 5.3% over the past twelve months[7], highlighting the potential for further growth.

Madrí captures “El alma de Madrid” or “The Soul of Madrid” and has all the taste characteristics of a modern European-style lager. The crisp, clean and refreshing lager is full of flavour and aroma at 4.6% ABV, with a light golden colour and a smooth, well-rounded taste profile with a short bitter finish.

To support the growth of the brand, Molson Coors will be launching a multimillion-pound ATL investment during the first half of next year.

Ryan Mclaughlin, Marketing Controller – Premium Beers, Western Europe at Molson Coors, said: “Madrí has taken outlets by storm since it launched, tapping into the demand for premium options and consumers’ love for exciting new world beers. Given it has only been available for twelve months, with the majority of those having been in a lockdown, its popularity is a real testament to the brand and its great taste experience.

“We launched Madrí with the ambition to grow to 2,000 distribution points by the end of the year and we have already exceeded that target. We will be significantly investing in the brand at the start of next year to continue to raise its profile even further and help operators up and down the country make the most of this great brand’s growing popularity.”

For over two centuries Molson Coors has been brewing beverages that unite people for all of life’s moments. In the UK and Ireland we now have four breweries, with our UK home in the renowned brewing town, Burton upon Trent, and a nearly 300-year-old cider press in Suffolk.

Molson Coors produces some of the most beloved and iconic beer brands ever made. While the company’s history is rooted in beer, Molson Coors offers a modern portfolio that expands beyond the beer aisle. Our growing beverage portfolio in the UK and Ireland includes Aspall Cyder, Atlantic, Cobra, Madri, Pravha, Staropramen, Rekorderlig and Three Fold, alongside popular favourites Coors, Carling – the UK’s number one selling lager, and the UK’s number one selling cask ale – Doom Bar.

Molson Coors Beverage Company is a publicly traded company that is traded on the New York and Canadian Stock Exchange (TAP). The company’s commitment to raising industry standards and leaving a positive imprint on our employees, consumers, communities and the environment is reflected in Our ImPrint and our 2025 sustainability targets. To learn more about Molson Coors Beverage Company, visit molsoncoors.com or on Twitter through @MolsonCoors.