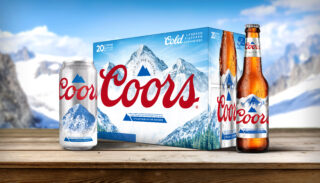 Molson Coors Beverage Company will rebrand Coors Light to Coors from March 2021 with a multimillion-pound marketing spend in the UK to drive ongoing growth in the premium 4% beer category.

The activity will build on the success of the “Keep it Fresh” campaign, which celebrates the brand’s Rocky Mountain heritage. The transition will underline the brand’s mountain cold, refreshing taste and will be supported by new packaging and point-of-sale material.

Known as “The World’s Most Refreshing Beer™”, Coors has recently become the No. 6 lager brand in the UK[1], and its latest move will cement its position as a leading premium to mainstream beer, having grown in volume by over 1 million hectolitres in the last decade, securing its position as the biggest premium 4% beer. It is also the number one 4% beer among 18-34-year olds[2].

Molson Coors will use the rebrand as a platform to expand the Coors family in the UK and across the rest of Western Europe. Next year will see the launch of a new Coors product from the US, with the introduction of Coors Original – a brand packed full of heritage having been originally launched in 1873. A rich, golden lager that delivers the refreshment expected from a beer created in the Rockies, it has a more complex, fuller flavour and will further grow the brand’s presence in the premium segment of the market.

Sophie Jamieson, Marketing Controller for the Coors Family of Brands at Molson Coors said: “Coors has skyrocketed in popularity in recent years, becoming the leader of the premium 4% beer category, known for being a great tasting beer that always delivers on refreshment.

“Having reflected on the unique strengths of the brand we saw an opportunity to maximise its potential. Our testing has shown that consumers love the new branding, finding it more distinctive and appealing, and by changing to simply ‘Coors’ we can build further momentum in the premium 4% beer category, while continuing to champion our refreshing great taste which is a clear point of difference for consumers.

“It also gives us the opportunity to introduce some incredibly exciting new products from the Coors family, starting with Coors Original later in the year. Our ambition is not only to propel Coors into the UK’s Top 5 beers, which is why we’ve put significant spend behind the brand, but also to continue to scale our presence and expand our portfolio throughout what looks to be a very exciting year in 2021.”

Molson Coors Beverage Company is a publicly traded company that is traded on the New York and Canadian Stock Exchange (TAP). The company’s commitment to raising industry standards and leaving a positive imprint on our employees, consumers, communities and the environment is reflected in Our Beer Print and our 2025 sustainability targets. To learn more about Molson Coors Beverage Company, visit molsoncoors.com or on Twitter.

Press release from Citypress on behalf of Molson Coors