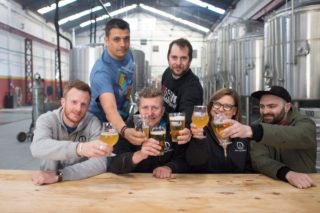 The team from Moncada Brewery

” I bumped into Alberto, the event organiser at the Festival de Cervesas Extremas in Buenos Aires last month,” he says. “I heard ‘a Custard Festival in Argentina’, and said,  “That doesn’t sound very likely, but I’d definitely like to meet the organiser!”

“It turns out I wasn’t hearing things properly that day, and with a much improved translator and my ears working a little better it transpired it was a cask ale festival supported by CAMRA, the Campaign for Real Ale and hosted by Alberto, Argentina’s only certified and qualified cellar man. Now in its second year, the Festival held on the 13th July 2019 in Lujan, Buenos Aires hosted 6 traditional cask ales, casked especially for them by local brewers including a 10.4% Imperial custard stout from Moncada Brewery brewed in collaboration with Gorilla Brewing of Buenos Aires. Custard, you see. It was destined to be!”

Details of the collaboration brew info can be found here – http://www.moncadabrewery.co.uk/news/events/first-beer-festival-buenos-aires