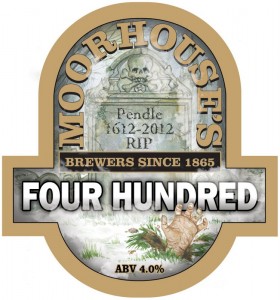 Moorhouse’s acclaimed brewers have been busy stirring the hop cauldron to brew a magical special ale for the 400th anniversary of the legendary Pendle Witches.
Four Hundred (4%abv) brew makes its debut for September as the latest in this year’s seasonal range. The famous ‘witches’ brewer has combined pale and crystal malt with Cascade and late added Crystal hops to create a classic English pale ale in style ‘with a twist of American hops’. This gives a hint of citrus spice and tangerine on the aroma backed by a smooth bitterness and a sweet hint of caramel in taste. There’s striking pump clip to reflect the dramatic story.
Ten alleged witches who inhabited the wild area around east Lancashire’s landmark Pendle Hill were executed by hanging at Lancaster Castle in 1612, after what has been condemned by historians as a sham trial.

Moorhouse’s expects the beer to put further focus on its current online ‘Pardon the Pendle Witches’ campaign. The award winning Burnley brewer is supporting the belief that in the 1600s there was a gross miscarriage of justice; that the accused were made an example of because of the harsh social climate of the time and that a ‘show trial’ that hinged on the evidence of a nine year old girl.

To support the campaign visit www.moorhouses.co.uk

Managing director David Grant said: “Four Hundred is a one off brew to bring further attention to the alleged Pendle Witches and their unjust trial and execution. We believe it will prove a very bewitching beer, in the nicest possible way of course, to bring further focus to the tragic events of 1612 and our campaign to have the ten pardoned.”

The launch of a new £4.2m brewing complex in Burnley last year trebled the former production capacity at the North West’s leading dedicated cask brewer to more than 1000 barrels- a- week.

Founder William Moorhouse established his drinks manufacturing business in Accrington Road, Burnley, and Lancashire in 1865. Originally it produced mineral waters and then low strength hop bitters for Temperance Movement bars. Moorhouse’s began full strength brewing in the 1970s and in the eighties Manchester businessman Bill Parkinson bought the then ailing brewery ‘because he liked the beer’. Now, Moorhouse’s directly supplies several hundred pubs throughout the North West region and in Yorkshire, while distributing nationally via leading wholesalers and major pub chains.