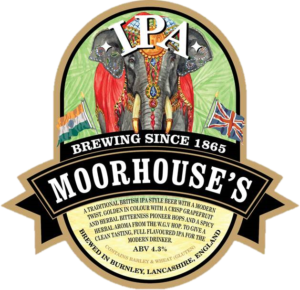 Moorhouse’s – a main sponsor of Camra’s Manchester Beer & Cider Festival – unveiled a programme of special ales for 2017 at the North’s biggest beer celebration.

The creative brewing team has crafted a raft of exciting seasonal brews alongside the six championship core ales – now including White Witch, the fastest growing brand. The year started with Ice Witch (4.3%), light, golden ale, single hopped with Citra to showcase the icy intense aromas of tropical fruit, mango and pineapple from this hop.

This is being followed for February by Moorhouse’s IPA (4.3%); traditional British IPA style beer with a modern twist; golden with a crisp grapefruit and herbal bitterness from Pioneer hops and a spicy herbal aroma from the W.G.V hops.

March welcomes Irish Red Ale (4.2%) based on the classic Irish style, this strikingly red beer is driven by subtle flavours of caramel toasted malt and a hint of roasted cereal on the nose balanced by the use of traditional Fuggle hops to give a mellow bitterness and a hint of fruit and spice.

April sees easy drinking Spring Watch (3.9%) arrive as golden cask ale with a fresh lemon and spice aroma and a fresh, fruity mouth feel from the use of Slovenian Styrian, Dana and Aurora hops and a late addition of American Mount Hood. 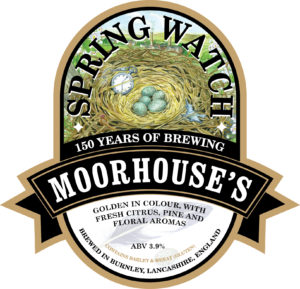 For May, Azacca (3.8%) appears – single hopped with the new American hop Azacca. This blond ale showcases the hop variety with hints of fruits and mango to give a refreshing, big citrus and easy drinking beer.

In June Pendle Pilsner (4.1%) brings a Bohemian Czech style lager brewed using traditional Bohemian pilsner malt to give an authentic rich Pilsner malt taste backed with aromas of herbs, spice and citrus from the use of Saaz, Hallertauer Mittelfruh and Tettnanger hops.

For July APA (4.7%) takes the floor: Golden straw coloured ale using the finest all-American, Cascade, Centennial and Citra hops. This gives a strong but smooth bitterness and a big punch of citrus, pineapple and tropical fruit aromas all balanced with a sweet caramel malt taste from Maris Otter malt.

In August we see the return of the popular Old Boss Pale ale (4.3%). A premium pale ale, inspired by an award winning hop bitter recipe dating back to the 1800’s – but with a modern interpretation using the American hops Simcoe, Summit and Chinook. In September First Cut (4.2%) – rich amber coloured ale – celebrates the Maris Otter malted barley grown by our very own North West farmers.

And for the October Halloween season Ruby Witch (4.6%) sweeps in – dark ruby beer that is full bodied with subtle roast flavours and hints of spice and tangerine notes from the Crystal and Cascade hops.

In 2016, Stray Dog (4.2%abv) was launched with the legendary Manchester born New Order band, created at the multi-million pounds state-of-the-art Burnley brewery by head brewer – and keen fan – Dan Casaru.  Named after a track on the band’s new album, Music Complete, it is brewed with three US hop varieties for hints of citrus fruit and lychee as a cask ale to appeal to both craft and traditional ale categories.

Sales director Mark Boardman said: “Stray Dog pays tribute to Manchester’s legendary music and has been a terrific addition to our award winning portfolio. It clearly highlights our commitment to a future as an established, traditional brewery with a very modern style.

“This approach is further underpinned by the roll out of a variety of seasonal brews for that all important guest spot in a highly competitive marketplace. Our sponsorship of the Manchester Beer Festival clearly demonstrates our commitment to supporting publicans across Greater Manchester and the North West.”

In a further commitment to growth in the northern heartland Moorhouse’s has recently appointed Louie Dunkin as sales executive for Manchester, while Stuart Hayes develops business in Cheshire and Liverpool.

Note to editors: Moorhouse’s has won many awards: Black Cat (3.4%abv) was crowned Supreme Champion at the Great British Beer Festival  2000 and in early 2011 was proclaimed the best moderate strength ale by the Brewing Industry International Awards (BIIA) – the ‘Oscar’s’ of the brewing world. Pride of Pendle (4.1%abv) was hailed as ‘best cask ale in the world’ when voted BIIA Champion Cask Ale in 2004 and Premier Bitter (3.7%abv) also took gold in its class the same year.  Pendle Witches Brew (5.1%abv) has also won several top brewing awards while Blond Witch (4.5%abv) has enjoyed wide acclaim from consumer and industry competitions. Newcomer White Witch (3.9%abv) is the fastest growing brand.