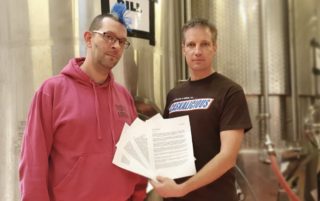 CAMRA members Kev Jones and Phil Saltonstall, both of Brass Castle Brewery, with the open letter.

110 brewers have signed an open letter calling on CAMRA to end its use of discount vouchers and criticising its refusal to debate the issue at this year’s Annual General Meeting.

The signatories are from breweries all over the UK, and include many brewers of CAMRA-judged award-winning beers, including national champion beers. More breweries are coming forward in support.

They say CAMRA’s current policy undermines real ale and pushes drinkers to corporate chains, to the detriment of smaller pubs. They say the current policy imperils small breweries and many independent freehouses.

In the letter, they say: “…it is dangerously inconsistent for CAMRA to promote real ale as the pinnacle of the brewer’s art while simultaneously making it the cheapest beer on the bar. Inevitably, new drinkers will be led to have little regard for the quality of real ale. The policy also undermines CAMRA’s public image, as it promotes that which it was established to overhaul: a limited range of beers from large breweries, served-up cheaply by pub chains.”

The Scarborough Branch of CAMRA had proposed a motion on this issue for the forthcoming AGM in York, but CAMRA has rejected it from the order paper. An appeal has been lodged, but will not be heard until the night before the AGM. Had the motion been accepted and passed, CAMRA would have stopped providing or promoting discount schemes, but could have still acknowledged any private businesses that wanted to offer its own discounts.

Currently, all CAMRA members are sent sixty vouchers a year for use at a selection of large bar chains. Each voucher offers 50p off a pint of real ale, cider or perry. The brewers say the practice sets unrealistic expectations among new real ale drinkers, damages small breweries who cannot produce to the scales the big chains require, and disrespects the craft that goes into producing real ale.

The open letter says: “CAMRA will win more support from the wider brewing and pub industries when it stops driving people to chain pubs for cheap beer, and when it instead respects real ale, respect the pubs that showcase it, and respects the brewers who produce it.”

Scarborough Branch member Phil Saltonstall, who owns Brass Castle Brewery in Malton and who proposed the motion, said: “As a CAMRA member who firmly believes in real ale and its position as the most interesting and characterful way of showcasing beer, I’ve always been offended every time I am sent discount vouchers with my membership renewal. The discount vouchers run counter to my desire to support high-quality real ale and I’m particularly worried that they drive members away from the very pubs that need their support. I love real ale and these discount vouchers cheapen it.

“I know not everyone will agree with our motion, but many do and there was an excellent opportunity to have the debate in April at the AGM. It is infuriating that CAMRA has sought to stifle this debate. In doing so, it said the matter was an internal issue, which shows a blindness to the huge impact this has on real ale, breweries and publicans, and CAMRA’s public image.

“Of course, CAMRA is a consumer organisation, rather than an industry body, but a consumer organisation that prices its favoured product out of existence does not make any sense. It is the prerogative of businesses to offer discounts as they wish but CAMRA itself cannot be both the champion of good-quality, great tasting cask beer and the promoter of bargain-basement cheap pints.

“To accommodate price discounting, some pub companies insist that brewers provide real ale at a crazily low price. This works for large breweries or cheap-to-produce or short-dated beers, so CAMRA is diminishing the real ale market and either harming small breweries or forcing them to produce something other than real ale.  It is a direct effect of price discounting that more breweries are turning to the production of keg beers and discontinuing cask beer production.

“Opponents of this motion may fear it would lead to a reduction in CAMRA numbers, but there are many other ways CAMRA could incentivise membership and in any case, the organisation’s incoherent policy on this issue undermines its credibility in almost all campaigning areas. It cannot exist only to boost its own membership numbers, while the fate of real ale is left to its own devices and all indicators on the health of the real ale industry are on the slide. Cask beer needs a self-respecting and energetic Campaign for Real Ale now more than ever.”

To the National Executive

As brewers, we are incredibly proud of our cask beer product and we all want to see it thrive. UK real ale has a respected international reputation, attracting visitors from around the world who want to enjoy a pint in a quintessential British pub. CAMRA has been a strong advocate for cask beer, its producers and purveyors, and long may that continue.

However, CAMRA’s current policy of giving its members discount vouchers for a small number of large pub chains, in mainly urban areas, jeopardises its own hard-won successes. The promotion of discounting and this particular discount scheme devalues real ale, and imperils freehouse pubs and smaller breweries.

We had hoped to have this debate at the forthcoming CAMRA AGM in York, and welcomed the motion put forward by the Scarborough branch. If carried, that motion would have ended the CAMRA-led discount scheme but acknowledged the right of independent businesses to offer their own discounts. Sadly, CAMRA has rejected the motion from this year’s order paper and stifled debate. We are deeply disappointed in this refusal to engage with the issue.

Let us be clear: it is dangerously inconsistent for CAMRA to promote real ale as the pinnacle of the brewer’s art while simultaneously touting it as the cheapest beer on the bar. Inevitably, new drinkers will be led to have little regard for the quality of real ale. If a new member’s first experience of real ale is a cheap pint in a chain bar, then much of the charm and quality of the real ale experience is lost.

The policy also undermines CAMRA’s public image, as it promotes that which it was established to overhaul: a limited range of beers from large breweries, served-up cheaply by pub chains.

We are particularly concerned that the current policy drives CAMRA members away from the very pubs it then needs to campaign to protect.

When CAMRA was established, 22% of beer drunk in the UK was real ale and now that figure is only 9%. All of us in CAMRA want to turn that trend around, but handing out discount vouchers shows a lack of faith in real ale.

CAMRA will win more support from the wider brewing and pub industries when it stops driving people to chain pubs for cheap beer, and when it instead respects real ale, respect the pubs that showcase it, and respects the brewers who produce it. If individual breweries and pubs wish to offer discounts or loyalty rewards, that is their prerogative, but our campaign organization should not be actively undermining its own reason for existence.

Out There Brewing Co – Stephen Pickthall