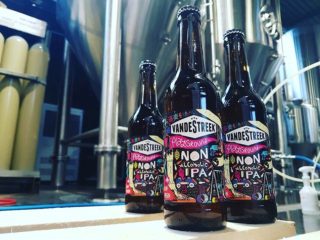 With ‘Dry January’ taking place more and more consumers opting for quality low/no alcohol beers throughout the year, leading importer Morgenrot has made it easier for operators to appeal to this growing audience with the launch of the non-alcoholic Playground IPA from the Dutch craft brewer vandeStreek Brouwerij.

Brewed using five types of American hops including Mosaic, Citra and Cascade varieties, the new launch taps into the demand for the IPA beer style and is available immediately to the ON and OFF-Trade in 33cl bottles in cases of 24.

“There’s a huge opportunity in the UK market for flavour-rich non-alcoholic craft beers and with more and more consumers switching to low-alcohol options we’ve been on the lookout for a unique brand to help fill this void. The Netherlands has been developing a fantastic reputation in the craft beer world and the vandeStreek Brouwerij has been at the heart of this. Their Playground IPA is an incredible low alcohol beer – capturing the essence of a classic IPA without sacrificing the flavour. It tastes great, looks great and I believe will be a big hit with discerning UK craft ale drinkers, whether they want alcohol or not.”

VandeStreek Playground IPA Non-Alcoholic (<0.5%) – Amber in colour with a persistent lacy head, this non-alcoholic IPA is brewed with 5 types of American hops and has all the citrus and tropical flavours you are looking for as well as a nice bitterness and a strong lasting finish.

“We’re thrilled to launch our Non-Alcoholic Playground IPA into the UK through Morgenrot and can’t wait to get things cracking in ‘Dry January’. With consumers around the world enjoying the hop-forward IPA style, we are confident our Playground IPA can stand alongside and compete with the best low/no alcohol beers in the category.”

The brewery was set up by brothers Roland and Sander Van De Streek who began brewing beer in 2010 in their flat in Utrecht, the Netherlands. At first, the brothers had no intention of starting to brew commercially, but in 2013 they started a crowdfunding campaign and the brand was born.

The first beers introduced to the public were their brews Broeders and Dark Roast at the Utretch Beer Brewers Festival and since then many others have followed including their HopArt series and Playground editions. The brewery also received international recognition at the World Beer Awards in 2016 with their BlackBock, Dark Roast and Koper beers all receiving awards.

Established in 1970, Manchester-based Morgenrot supply a sublime selection of wines, beers, ciders and spirits nationally including Krombacher, Windhoek, Tribaut, Loxarel, Supper Club and Vallemajor to name a few. The company recently launched an exciting range of Spanish Vermouths and Gins.