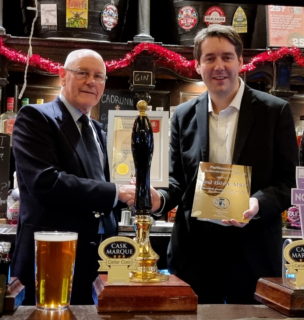 Neil Bibby, Labour MSP for West Scotland, has been presented with a prestigious Parliamentary Achievement Award by consumer organisation CAMRA, the Campaign for Real Ale.

The award is presented to the parliamentarian who has played the biggest part in campaigning to protect and promote pubs, breweries and beer drinkers.

In its 50th Anniversary year, CAMRA decided to give the accolade to Mr Bibby in recognition of his work to pass the Tied Pubs (Scotland) Act 2021 into law earlier this year.

It followed several years of campaigning by Neil Bibby together with organisations like CAMRA and the Scottish Licenced Trade Association.

Neil’s new law will help to ensure that those running tied pubs are treated fairly and can earn a decent living through the introduction of a statutory pubs code governing the relationship between tied pub tenants and pub-owning businesses, as well as an Adjudicator to enforce the rules.

As well as helping publicans earn a decent living, the Tied Pubs Act will also allow them more choice over which beers they stock, instead of having to buy a restricted range of stock at increasingly high prices from the pub-owning company.

“It is an honour to receive this award from CAMRA and to be the first Member of the Scottish Parliament to do so. I hope that my work in taking the Tied Pubs Bill through the Scottish Parliament will help regulate the behaviour of big brewing giants and deliver more choice for pub-goers. CAMRA have been right behind the Tied Pubs Bill from day one and it has been a pleasure working with them to improve the law for publicans and consumers.

“Our campaign was always about fairness, choice and jobs – fairness for publicans, choice for consumers and protecting jobs in Scotland’s pub and brewing industries. Those principles matter as much now, as the pub sector recovers from the Covid crisis, as they did when we began this journey almost five years ago. What we have achieved will deliver a better deal for Scotland’s pub-goers.”

“Neil has long been a champion for the beer and pub industry, standing up for the rights of tied pub tenants to make sure that they are treated fairly and can earn a decent living.

“His efforts over many years to introduce and build cross-party support for his Tied Pubs Act have secured much-needed changes to the law to help protect and improve community pubs, support tied licensees and increase choice of local, independent beers on offer at the bar.

“We are delighted to present Neil with CAMRA’s Parliamentary Achievement Award for his work on behalf of beer drinkers, pub-goers and tied pub tenants in the West of Scotland and across the country.”

Ray Turpie, who presented the award to Neil Bibby on behalf of CAMRA’s Awards Committee, said:

“It has been a pleasure to work with Neil over several years to secure these much-needed protections in law for pubs and publicans. His award is richly deserved, and marks the first time in recent memory that this prestigious award has been presented to a parliamentarian outside of Westminster.”