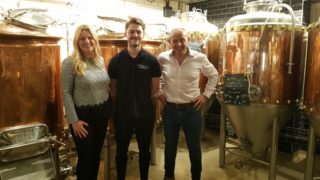 As part of the celebrations, the BBPA has reaffirmed its commitment to increase the number of apprenticeship starts in the hospitality sector by more than 50%. This will be done as part of the Sector Deal for Tourism that is being implemented alongside other industry partners.

From 2017 to 2018, there were 18,560 new apprentices who started in the hospitality sector. As part of the Sector Deal for Tourism, the BBPA and other partners have committed to achieving 30,000 hospitality apprenticeship starts annually by 2025.

Apprenticeships add enormous value to both brewing and pubs and after support from the BBPA, the UK’s first brewer apprenticeship was launched last year, providing a new and exciting educational route for the brewers of the future.

In celebration of this, BBPA Chief Executive Emma McClarkin visited Brewhouse & Kitchen Angel, to meet head brewer Felix Francisco Granell who has come through the brewing apprenticeship programme. Brewer apprentices like Felix learn not only how to brew beer, but how to understand regulatory requirements, design and develop new brands, as well as operate equipment. The apprenticeship scheme is approved by the Institute for Apprenticeships and delivered at Level 4.

The BBPA and its members will also be attending the Hospitality Apprenticeship Showcase in parliament on February 4th. The event, held as part of National Apprenticeship Week, sees MPs participating in a range of fun activities designed to showcase the range of skills required to work in the beer, pub and hospitality sectors.

“National Apprenticeship Week allows pubs, brewers and the wider hospitality sector to demonstrate the great careers we have to offer.

“We’re especially proud of our commitment to increase the number of apprenticeships by more than 50% in hospitality as part of the Sector Deal for Tourism. We need to attract more people to work in our sector, and apprenticeships are a fantastic way of doing this, as shown by the success of the brewer apprenticeship which the BBPA helped to create and implement.”