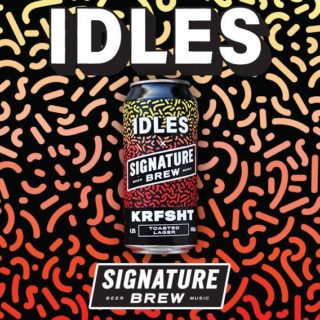 Available to pre-order from today via signaturebrew.co.uk/idles the toasted lager is malty, mouthy and modern and aspires to be as essential as the band it’s brewed with. The first 200 orders also come with a foldout A3 poster zine with a limited-edition IDLES & Signature Brew art print.

The beer’s unconventional name is the almighty sound of a can of beer opening and was chosen by the band’s frontman, Joe Talbot. The artwork was also designed by the frontman and the beer’s style, a toasted lager, was decided on by the band and developed by Signature Brew’s award-winning brew team.

The beer will be available to drink and takeaway on the weekend of the band’s Alexandra Palace show from Friday 6th December onwards exclusively at Signature Brew’s East London brewery (where it can be enjoyed where it was brewed) – or alternatively at their taproom and grill The Collab (Walthamstow) or the Signature Brew Taproom & Venue (Haggerston).

IDLES’ second record ‘Joy As An Act Of Resistance’ debuted at no.5 in the UK charts, breaking Rough Trade’s all-time record for most pre-orders and sales in a day. It was the joint no.1 best reviewed record of 2018 (average rating of 88 across 25 reviews) at Album Of The Year and in the Top 10 on Metacritic.

Since 2011 Signature Brew have created award-winning, music-inspired beers and collaborated with the likes of Slaves, Mastodon, Mogwai and many more. IDLES’ KRFSHT is the first artist collab beer to be brewed at their new brewery in Walthamstow, London, which is now open to drinkers every Friday, Saturday and Sunday.