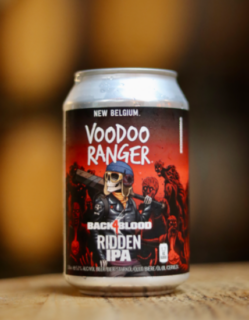 Craft beer brand Voodoo Ranger has partnered with new Warner Brothers video game, Back 4 Blood, launching limited-edition beer Ridden IPA, to mark the launch. The brew takes its name from the monsters characters fight in the game and will launch at the same time as the game on 12th October 2021.

Introduced to the UK last November, Voodoo Ranger already enjoyed real credibility and a good standing with US gamers as their go-to beer. The brand was passionate about translating this for British gamers and, despite launching here less than a year ago, is already gaining a reputation with the esports community. To date, Voodoo Ranger has run interactive Twitch campaigns, partnered with Dungeons & Dragons live streams and taken its Voodoo Ranger arcade machine on tour to festivals and on-trade accounts, taking advantage of experiential opportunities both on and offline.

As part of the limited edition launch of Ridden IPA, Voodoo Ranger will be working with Dalston’s Loading Bar to give gamers the chance to play the game before it’s released while enjoying Ridden IPA on draught. The activation will take place from Thursday 7th October to Sunday 10th October before the game officially launches on the 12th October. As well as the on-trade activation, Voodoo Ranger will be offering its brand fans the opportunity to win gaming gear when they buy beer online through its web shop. The online competition will apply for all pre-orders of Voodoo Ranger’s Ridden IPA packs from 1st October – 11th October. Competition will end Sunday 17th October.

Chris MacRae, Voodoo Ranger Brand Developer, said: “Left 4 Dead is iconic and to have the chance to create a collab beer for its spiritual successor, Back 4 Blood, has been awesome and a very natural fit for the Voodoo Ranger brand. Our marketing strategy is all about giving something back to brand fans and that’s the whole idea behind the partnership with Dalston’s Loading Bar and giving gamers a pre-release chance to play.”

More information can be found at https://voodooranger.co.uk.

Voodoo Ranger, made by New Belgium Brewing, is the fastest growing IPA brand in the US.  Initially launched as three beers in 2017, Voodoo Ranger has released nearly 20 beers in the US over the past few years including the flagship Voodoo Ranger IPA, Voodoo Ranger Imperial IPA, Voodoo Ranger Juicy Haze IPA, along with recent releases like Voodoo Ranger American Haze, the Xperimental IPA and 1985 IPA. Voodoo Ranger has similar plans for the UK after making its way across the Atlantic under the Lion Little World Beverages’ quartet that also covers British grown Fourpure Brewing Co. and Magic Rock Brewing along with Australian favourite, Little Creatures. His journey started with the launch of a UK exclusive Hazy IPA in November 2020. For more information or to see the Voodoo-inspired iconic art and design, follow @voodoorangeruk on Instagram.  To learn more about the Voodoo Ranger portfolio, visit newbelgium.com or voodooranger.co.uk.

New Belgium Brewing is recognized as a leader in sustainability and social responsibility. Founded in 1991 in Fort Collins, Colorado, the company expanded to Asheville, North Carolina in 2016 and Denver, Colorado in 2018 and is now the 4th largest craft brewery in the U.S. Dedicated to proving that business can be a force for good, New Belgium is a Certified B Corp and was the first brewery to join 1% for the Planet. The brewery has donated over $26 million to charitable causes since 1991. New Belgium is famous for its flagship beer, Fat Tire Amber Ale, along with year-round favorites like Voodoo Ranger IPA, USDA certified organic The Purist Clean Lager, and La Folie Sour Brown Ale; as well as an award-winning wood-aged sour program and innovative limited release beers. To learn more about the full product lineup and New Belgium’s Human Powered Business model, visit NewBelgium.com

This UK-based arm of Lion’s Australian brewing business is spearheaded by Managing Director of Lion Little World Beverages Europe, Gordon Treanor. With more than 20 years’ experience in beer, most recently heading up Lion’s craft portfolio in Australia, Treanor brings a wealth of knowledge from the dynamic Antipodean market that he hopes to translate into the rapidly growing UK craft sector.

London’s Bermondsey-based Fourpure and Huddersfield-based Magic Rock lead the charge with both having seen strong growth in 2019, with national distribution through leading retailers and a strong portfolio of core and seasonal products. The pair have been at the forefront of the craft beer scene since 2011 and 2012 respectively.

Warner Bros. Games is a premier worldwide publisher, developer, licensor and distributor of entertainment content for the interactive space across all platforms, including console, handheld, mobile and PC-based gaming for both internal and third-party game titles. Additional information about Warner Bros. Games can be found at www.warnerbrosgames.com.