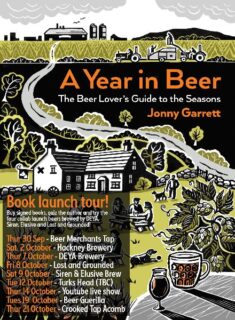 On the 27th September, beer writer and broadcaster Jonny Garrett releases his third book, A Year in Beer.

The book is an exploration of how our beer ingredients and drinkers’ tastes change with the seasons, and how Britain’s rich brewing history still influences us today. Going beyond Lagers when it’s hot and Stouts when it’s cold, A Year In Beer dives into why IPAs might taste best in April and Pilsners best in September. It tells the stories behind Easter and Christmas ale, describes why smoked beer is so nostalgic, and explains why Lambic is only made in winter. Discover the best UK beer experiences, from summer beer festivals to Autumn hop and apple harvests, taking in the glory of the seasons that make them possible.

The book is available via CAMRA Books, as well as at Beemerchants.com where it can be bought with four beers Jonny brewed with DEYA, Siren, Elusive and Lost and Grounded to represent each of the seasons.