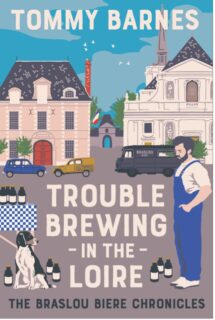 TROUBLE BREWING IN THE LOIRE

Early Praise for Trouble Brewing in the Loire:

A Beer in the Loire reviews:

‘He writes so well and is funny too.’ James McConnachie, The Rough Guide to France

‘Barnes adds something new to the Englishman in France genre not just by being extremely funny but by writing from the heart.’ –2018 Best Booze Books, Master of Malt

‘If, like the late Peter Mayle, Tommy Barnes decides to write a sequel it will be a must read.’ Life Begins at 40.

The opening pages of Trouble Brewing in the Loire set the tone for the memoir of an English family’s post Brexit adventure in France surrounded by animals, eccentric characters and lots of beer:

‘Hi, guys. Firstly, thanks for coming to our first ever Braslou Bière marketing meeting. Actually, let’s call it a thought tinkle. An ideas slurry. I appreciate some of you had to reschedule other meetings.

‘Albert, you’ll take the minutes, seeing as you’ve got a crayon. Shall we go around the table and introduce ourselves?’

Albert, strapped into his baby seat at the end of the tiled table in front of the grand fireplace in our large, high-ceilinged French country kitchen, regarded me curiously as he chewed a piece of banana.

‘Errr, Daddy. You a potato man,’ said Albert, aged two and a bit.

‘We’re just having breakfast, Tommy. This isn’t a marketing meeting.’

‘Good. OK, in that case I’d like to bounce a few slogans off you. Likewise, if you have any of your own, feel free to shout them out.’

Witty and warm, Trouble Brewing in the Loire celebrates the delights of France, family and friendship.

· It includes 12 previously unpublished, beer inspired recipes from chef, Tom Mathews whose South East London bakery, Chatsworth Bakehouse was born out of lockdown and has been featured in The I, The Times and The Telegraph.

· He has been invited to take part in Escape to the Chateau, Channel 4

Tommy Barnes grew up in Hertfordshire in the 80s. He worked as a graphic designer in London and appeared as a stand up comedian in his spare time.  Happily made redundant, he set off to find a new life in France with his girlfriend, now wife, Rose.  They bought a rundown Maison de maître in the Loire, started a family, acquired a menagerie and started a micro brewery, Braslou Bière. They have two young children and divide their time between France and Padstow in Cornwall.

For further information, to arrange an extract or an interview with Tommy Barnes please contact fiona@brownleedonald.com