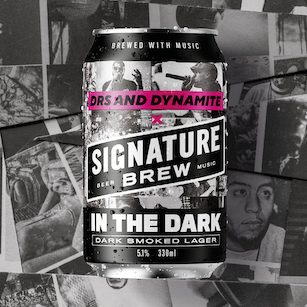 East London based brewery, Signature Brew (www.signaturebrew.co.uk), is on a mission: to revolutionise the quality of beer at live music events. Launched in 2011, Signature is the world’s number one brewery for band collaboration beers, having brewed with Idles, Mogwai, Alt-J, Slaves, Mastodon, Frank Turner, Rodney P, Enter Shikari, Sports Team and many more.  September 2020 sees the launch of two new beers, Passions (ABV 5%, £3.65 per 330ml can), a sweet & stormy Passion Fruit New England pale ale and In the Dark (ABV 5.1%, £3.25 per 330ml can), a dark smoked lager, created in collaboration with DRS and, musician and sommelier, Dynamite MC.

Passion is the lifeblood of music & beer. Without it, we’d be nothing. Passions is an over-hopped, hazy & gloriously fruity beer that pays tribute to the force that drives both the bands Signature Brew love and the beer they make. The base is a juicy New England pale, with lots of oats and wheat, a huge tropical aroma and a golden-yellow appearance. To taste, there’s a slight acidity from the passion fruit, lots of tropical fruit flavour, ending with a sweet finish. Fun Fact, the Japanese characters donning the eye-catching can read ‘passion fruit’ and the numbers hidden in the label are the co-ordinates for the brewery!

Fresh from their collaboration with Mercury shortlisted Sports Team, Signature Brew have teamed up with UK rappers, DRS and Dynamite MC (who also has a Mercury nomination, as part of Roni Size & Reprazent). Named after their brand new album, In the Dark, DRS and Dynamite MC created a dark smoked lager and celebrated the album, and beer, release at Signature Brew’s Walthamstow brewery at the end of August. As wine sommelier at Michelin-starred East London restaurant, The Clove Club, Dynamite MC brought a fresh perspective, crafting a complex dark lager made with beech-smoked malt, which evokes suggestions of an open fire and serves up dark fruit & cinder toffee tones with the crisp edge of a lager. Perfect for drinking in the dark.

Led by founders Sam McGregor and Tom Bott, the Signature brewery team is made up of musicians and music fans alike and – with an unwavering commitment to quality – Signature Brew has channelled the spirit and energy of live music into a brewery that stands for craftsmanship, artistry and passion. Brewed in Walthamstow, enjoyed by beer lovers and music superfans globally, their beers are of unrivalled quality, and they were crowned SIBA’s highly prestigious Brewery Business of the Year 2018.

2020’s Covid 19 crisis has seen Signature Brew get creative to keep the beer flowing in people’s homes, creating The Pub in a Box, hand delivered in London by musicians who’ve had their tours cancelled (paid London Living Wage) and delivered via courier nationally. When this all blows over, Signature Brew are also selling tickets for a proper piss up in a brewery, as well as two Skints gigs (their first in E17 for 10 years) as something for everyone to look forward to – we can all raise a glass to that!

As of Saturday 4th July, Signature Brew’s Walthamstow Brewery Bar, Haggerston Taproom and E17 Burger Bar, The Collab, are all open and pouring fresh pints, including the latest in the summer collection. There’s also a fresh selection of live music booked into the Brewery Bar to see out the summer, alongside a month-long music photography exhibition from DIY Magazine throughout September – see you there!