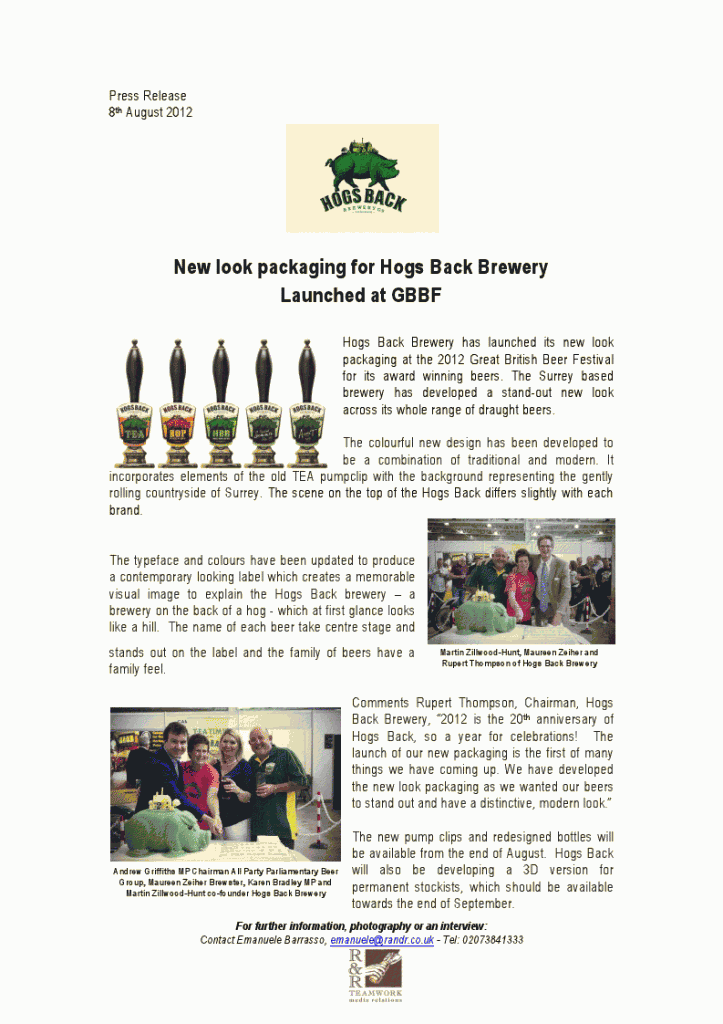 Hogs Back Brewery has launched its new look packaging at the 2012 Great British Beer Festival for its award winning beers. The Surrey based brewery has developed a stand-out new look across its whole range of draught beers.

The colourful new design has been developed to be a combination of traditional and modern. It incorporates elements of the old TEA pumpclip with the background representing the gently rolling countryside of Surrey. The scene on the top of the Hogs Back differs slightly with each brand.

The typeface and colours have been updated to produce a contemporary looking label which creates a memorable visual image to explain the Hogs Back brewery – a brewery on the back of a hog – which at first glance looks like a hill.  The name of each beer take centre stage and stands out on the label and the family of beers have a family feel.

Comments Rupert Thompson, Chairman, Hogs Back Brewery, “2012 is the 20th anniversary of Hogs Back, so a year for celebrations!  The launch of our new packaging is the first of many things we have coming up. We have developed the new look packaging as we wanted our beers to stand out and have a distinctive, modern look.”

The new pump clips and redesigned bottles will be available from the end of August.  Hogs Back will also be developing a 3D version for permanent stockists, which should be available towards the end of September.

The Hogs Back Brewery is an independent brewery based in Tongham, Surrey. The original brewhouse was part of an 18th century dairy and they then expanded into a pig sty and other farm buildings. It originally took its name from the ancient roadway and trading route between Guildford and Farnham, the Hog’s Back, today less romantically known as the A31.

The brewery was established in 1992 by Martin Zillwood-Hunt and Anthony Stanton Precious. Previously, Martin had had his own courier company, and Tony was a Land Surveyor/ Cartographer.

From January 2012, Rupert Thompson, former chief executive of Refresh UK, one-time brewers of Wychwood and Brakspear beers, became the new chairman of Hogs Back Brewery after acquiring the interest of Anthony Stanton-Precious.

Hogs Back supplies over 1,000 outlets in its South East heartland.