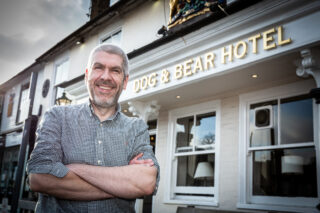 After moving to a new village, Mark Pringle and his wife decided that the best way to get to know the area was to head to their local. But the couple went one step further than that – and decided to run it too.

The pair had become regular customers at the 17th century hotel overlooking the picturesque village square after moving to their new home earlier this year.

Mark said: “I have worked as a manager in the hospitality industry for more than 26 years, most recently running a restaurant in Chatham for the past eight years. I was looking for a new challenge and when the General Manager’s role came up at the Dog and Bear it seemed perfect. We always enjoyed coming here, and the opportunity to really become part of the community and integrate into village life appealed to us.”

After a few weeks settling in, the pair are loving it – particularly the short commute! “We’re really enjoying it,” said Mark. “It is great to meet the locals and to interact with them, and it makes me feel more involved in the village. I actually know people’s names and faces! The team have made us feel very much at home too – and it takes five minutes to walk to work.”

Having worked for other pub companies before, he added that it had been a pleasant experience joining Shepherd Neame, having received a warm welcome from everyone at the family-run brewery.

“It really is like joining a family, you feel valued and an integral part of the company and its success,” he said.

The pair have been busy since starting, as business has been brisk at the Dog and Bear, with its 24 guest rooms fully booked most weekends. The hotel also has a popular restaurant, serving a delicious menu of traditional pub classics and light bites, using seasonal, locally sourced produce wherever possible.

Mark said: “We are still settling in and getting the basics right, but further down the line we hope to offer more event nights at the hotel and look at extending the menu to offer more specials and options for diners.”

Opening hours at the dog-friendly rural venue are now noon to 10pm Monday to Thursday and Sundays and noon to 11pm on Fridays and Saturdays.

Mark added: “The Dog and Bear is a very special hotel with lots of exciting opportunities to pursue going forward. We are so pleased that we decided to apply for the roles – it really is everything we hoped for.”