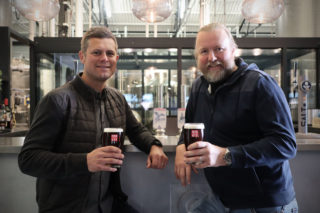 Yorkshire’s Ossett Brewery is poised for its next stage of growth with the appointment of Alex Minett as Managing Director of the brewing company.

Alex was latterly on-trade sales director at Red Bull and part of their UK Leadership Team.  Having been with the company for approaching 20 years, he was responsible for delivering the strategic direction of their UK on-trade business and guided Red Bull to be the No 1 on-trade packaged soft drink and No 1 on-trade energy drink brand over his tenure. At Ossett he will be tasked with accelerating growth following a £1.7million investment in brewing capacity, warehouse facilities and equipment, building works and new packaging resources.

A graduate in physical education at Leeds Metropolitan University, Alex joined Red Bull in an entry sales role in 1999 – knocking on corner shop doors across the mean streets of Yorkshire. He then worked his way up through the business and held a variety of off-trade positions including heading up the grocery channel.  He has spent the last 12 years working in the on-trade where he held several channel manager roles, including wholesale and retail, before moving into the sales director role six years ago.

Alex has joined Ossett Brewery at the end of September. He said: “I am really looking forward to playing my part in taking Ossett forward at this very exciting time. The brewing and pub industry is experiencing a very vibrant period, with many new challenges and opportunities. Ossett has a reputation for having amazing people and for producing excellent beers and I look forward to harnessing both to help deliver a successful future for the brewery and the brands.”

Leading award winning brands Yorkshire Blonde, Silver King and Excelsior have been part of Ossett’s core range since the brewery’s inception in 1998 and are sold across its own estate of 27 pubs alongside hundreds of free trade accounts and through selected wholesalers. Ossett has a group turnover of £17m and a workforce of over 400 local employees.

Work is also underway for the exciting new rebrand to be launched in November for the brewery, featuring brand new pump clip designs for the core range and seasonal beers, a company logo and various POS.

Ossett has invested over £3million over the last two years in the existing Ossett Brewery site and its new brewery, Salt Beer Factory, in Saltaire. Salt Beer Factory is a micro-brewery and entertainment venue in a Grade II Edwardian tram-shed in the heart of the UNESCO World Heritage village of Saltaire, Bradford. The brewery concentrates on producing modern hop-forward beers in keg and can format.

Ossett owner Jamie Lawson said: “As we complete our very substantial investments in the brewery we are delighted to welcome Alex to the team. These are very exciting and challenging times in the fiercely competitive brewing and pub industry. We are now set to build on our roots as a high quality cask ale brewer and further grow business for our brands across cask, keg and packaged categories. Alex brings his wealth of experience at Red Bull to play a lead role in that growth.”

Ossett Brewing Company was founded in 1998 by brewer Bob Lawson and quickly became famed for its single variety hopped pale beers. Brewing capacity is currently 420 bbl (brewer’s barrels) per week plus 50bbl from four microbreweries: Riverhead in Marsden; Fernandes in Wakefield; the Rat at the Rat and Ratchet Brewery, Huddersfield, and SALT Beer Factory at Saltaire. The fledgling SALT Beer Factory recently toasted a double success in the fiercely contested World Beer Awards 2019. The innovative micro-brewery scooped UK gold medal in the WBA’s Black IPA class with ‘Answer is None’ (7.2% abv) and UK bronze for American IPA with ‘Alpaca DDH IPA’ (6.6% abv). Both winners were first brewed only in March this year.

Ossett has a mix of 27 community and Hop music pubs across Yorkshire and delivers directly to hundreds of pubs throughout northern and eastern England and nationally through leading wholesalers. Core brands are: Brunette Blond, Excelsior, Silver King, and Yorkshire Blonde. Ossett’s first pub – the Black Bull at Liversedge – opened in May 2003. The Tap in Ossett opened in 2007. There are now Ossett pubs across Yorkshire including: Huddersfield, Halifax, Sowerby Bridge, Mirfield, Knaresborough, Dewsbury, Leeds, Sheffield and York as well the home area of Wakefield.

The Hop sites are located in city centre venues where real ale remains a central feature along with live music in unique environments which blend traditional architecture with modern influences such as street art and music based graphic designs.