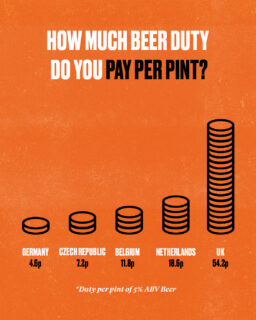 Research commissioned by The British Beer and Pub Association and Long Live The Local, the campaign to cut beer duty and help Britain’s pubs, has today revealed that Brits think the Government should support local pubs and breweries in the Budget on 3 March.

The research, conducted by YouGov, found that 3 in 4 Brits (76%) believed that pubs are important to local communities – a 4 percentage point increase since July 2019.

64% also said that pubs are important in securing the future of local high streets.

The British Beer and Pub Association and Long Live the Local said the findings show that the Coronavirus crisis and lockdowns have meant communities value their local pubs and breweries more than ever.

When asked if they wanted the Chancellor to help pubs in the forthcoming Budget, only 12% of respondents thought the Government should not do anything. 52% of people supported a cut in business rates, 46% of people wanted to see a cut or freeze in beer duty and 42% supported a reduction on VAT on pub food.

More than 6 in 10 people (62%) also said they think the Government should use the Spring Budget to support Britain`s brewing industry with 54% of people thinking a cut in beer duty should be included in the Budget, as 7 in 10 (69%) thinking that the level of beer duty in the UK, which is 11 times higher than that in Germany, is unfair*.

Emma McClarkin, CEO, British Beer & Pub Association said, “These findings serve as a much-needed reminder to how important local pubs are to our communities. People miss their local and the sense of community it brings. They also miss drinking a proper pint of their favorite beer. When we are through this crisis it is pubs that will bring our communities together again and provide that return to normality. Now it is on the Chancellor to listen to the people and give the support to pubs and brewers they want to see. That is a beer duty cut that will help our hard-hit locals get back on their feet and continue to serve their communities across the UK”

David Cunningham, Campaign Director of Long Live the Local, says, “This research shows how much people want Government to help Britain’s pub and brewing sector in this Budget -especially following the extremely tough year they have faced. This chimes with the strong support we have seen for our campaign. More than 500,000 people have signed a petition and 275,000 have written to their MP urging them to cut beer duty. The Chancellor must understand the plight faced by pubs and brewers and listen to all those who for three years have been asking for a cut in beer duty– it’s never been more needed.”

To add your name to the petition, please visit www.longlivethelocal.pub

All figures, unless otherwise stated, are from YouGov Plc.  Total sample size was 1,736 adults. Fieldwork was undertaken between 6th – 7th January 2021. The survey was carried out online. The figures have been weighted and are representative of all GB adults (aged 18+).

* Brits pay more than 54p (54.2p) in duty on every pint of beer they enjoy (5% ABV). Comparatively, in Spain and Germany the beer duty rates amount to just 5p per pint (5.1p and 4.6p respectively) – which means the UK pays eleven times more! Only Finland and Ireland pay higher rates in Beer Duty.

Long Live The Local is a campaign, backed by Britain’s Beer Alliance. It launched in 2018 to celebrate the vital social, cultural & economic role pubs and breweries have in Britain. It also highlighted the jeopardy that they face from a range of tax pressures, calling specifically for a cut in Beer Duty. So far, the campaign has gathered more than 500,000 signatures and 275,000 emails have been sent to MPs asking for a cut In Beer Duty

With the threat of further increases in beer duty in the Budget in Spring 2021, almost 130,000 people have signed a new petition and more than 100,000 have written to their MP.

Britain’s Beer Alliance was formed in 2014 to promote beer and pubs and encourage collaboration across the industry. The Alliance consists of independent pubs, pub companies, regional, independent and international breweries. In addition, 25,000 pubs have actively supported the campaign.