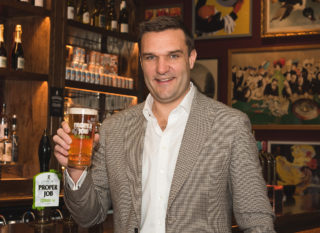 Kevin Georgel, Chief Executive said: “I am delighted that Andy will be joining St Austell Brewery. With almost 20 years’ experience and success gained within Heineken UK, he brings the ideal experience, talents and personality to compliment the skills of the existing team, and to lead our beer and brands division into its next exciting chapter.”

Andrew Turner, Managing Director, Beer and Brands commented: “I am absolutely thrilled to be joining St Austell Brewery – a wonderful family business which brews fantastic beers and runs great pubs, both of which are very close to my heart.

“It’s a really exciting time to join the business. I believe St Austell Brewery is very well placed to benefit from the resurgence in consumer interest in beer, coupled with the increasing importance of authenticity and community.

“I am very much looking forward to joining Kevin and the team and taking the business on to its next stage of growth.”

This latest high-profile appointment to St Austell Brewery’s leadership team comes one month after Kevin Georgel became Chief Executive and less than a year after Georgina Young joined the company from Fuller’s, as Head Brewer of Bath Ales – which St Austell Brewery acquired in 2016.

A gem at the heart of the Cornish community, St Austell Brewery also runs 180 pubs, inns and hotels across the West Country and employs over 1,500 people.