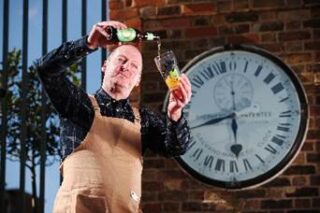 Meantime Brewing Company, the award-winning Greenwich based brewery, has teamed up with Royal Observatory Greenwich to launch new spring beer

LONDON March 2021; This Sunday, 28 March 2021, Meantime Brewing Company will launch a new ‘Spring Forward’ pale ale, just as the clocks go forward an hour, signalling the start of British Summer Time. The limited-edition Spring Forward pale ale (4% ABV) has been specially brewed and crafted for longer summer days. The beer is made with Australian Galaxy hops and boasts aromas of passion fruit and peach, supported by a biscuit like malt base. The beer will be available to purchase from Meantime’s online shop https://shop.meantimebrewing.com/. To launch the new beer Meantime has teamed up with the Royal Observatory Greenwich, also known as ‘The Home of Time.’ Royal Observatory Greenwich hosted the first official tasting of Meantime’s ‘Spring Forward’ pale ale in the Meridian Courtyard, with Meantime Head Brewer Thorsten Fischer and Senior Brewers Sven Hartmann and Joe Gardner. The Brewers took the first sips of the beer at the Meridian line and in front of the Shepherd Gate Clock, a unique 24-hour analogue time piece that was the first ever clock to show Greenwich Mean Time.

Thorsten Fischer, Head Brewer, Meantime Brewing Company says: “Our new Spring Forward pale ale has been crafted specifically for British summertime. It’s brewed with Australian, Galaxy hops which offer a distinct passionfruit aroma. It’s bright and refreshing, the perfect drink to enjoy in the sunshine and the longer days.  This launch is a very proud moment for our brewing team, as a fellow Greenwich based institution we’re proud to be associated with The Royal Observatory. We look forward to working with them, and other members of the Greenwich community, in the future.”

Lucy Cooke from Royal Museums Greenwich said: “We’d like to thank Meantime Brewing Company for their support, and we were delighted for the first official tasting of their new pale ale to happen at Royal Observatory Greenwich ahead of the clocks going forward this weekend. Meantime’s support will further the Museum’s work, and we look forward to this being the first step in a long and fruitful partnership.”

Founded in 1999 by Alastair Hook, Meantime Brewing Company started life in a small lock-up on an industrial estate opposite Charlton Athletic’s football ground, before moving to the Greenwich Brewery. Meantime Brewing Company have announced a corporate partnership with the Royal Observatory Greenwich, also known as ‘The Home of Time’. Since the late 19th Century, Royal Observatory Greenwich has been home to the Prime Meridian, the line that marks the divide between the Eastern and Western Hemispheres. The longitude and latitude of countries around the world are based on their distance from this spot, which also acts as the global centre of time.

In celebration of the launch, the Greenwich based brewer will be offering home delivery of 1,000 complimentary packs to beer lovers across the UK so they can experience the first taste of Spring in the comfort of their home, with an exclusive giveaway launching at 1am on Sunday 28th of March.  The first thousand beer fans to visit http://springforward.meantimebrewing.com/ will get their hands on a unique code, entitling them to a free 6-pack of ‘Spring Forward’ redeemable through the Meantime website Webshop, with codes distributed on a first come first served basis.

Meantime Brewing Company are offering the public the opportunity to be one of the first to try the new pale ale with an exclusive giveaway launching at 1am on Sunday 28th of March. The first thousand beer fans to visit http://springforward.meantimebrewing.com/ will receive a unique code, entitling them to a free 6-pack of ‘Spring Forward’ redeemable through the Meantime website, with codes distributed on a first come first served basis. The promotion is available to people aged 18 years and over. Terms and Conditions apply.

Asahi UK is home to an exceptional portfolio of premium beer, ale and cider brands, including category leaders in the UK. The range includes international brands Peroni Nastro Azzurro, Asahi Super Dry and Grolsch. A portfolio to be envied which also includes local heroes: Fuller’s London Pride, Meantime, Dark Star and Cornish Orchards. Asahi UK’s focus is on elevating experiences for our customers and consumers through innovation, unrivalled service and offering brands with undeniable quality and provenance. Asahi UK believes that every business has a responsibility to understand and act upon its environmental impact and we continuously work towards sharing more information with our suppliers, customers and consumers about both the footprint of our beers, and how we are working to reduce it. Our place in the local community is highly valued and we strive to ensure that we are always making a positive contribution to the communities in and around our UK Breweries. For more information on Asahi UK and parent organisation, Asahi Europe International visit www.asahibeer.co.uk.

Royal Observatory Greenwich is home of the Prime Meridian and Greenwich Mean Time (GMT) and is one of the most important historic scientific sites in the world. Since its founding in 1675, Greenwich has been at the centre of the measurement of time and astronomy. Today visitors can stand on the historic Prime Meridian line, while the Observatory galleries and Peter Harrison Planetarium help unravel the extraordinary phenomena of time, space and astronomy.  The Royal Observatory is part of Royal Museums Greenwich which also incorporates the National Maritime Museum, the 17th-century Queen’s House and clipper ship Cutty Sark. This unique collection of museums and heritage buildings, which form a key part of the Maritime Greenwich UNESCO World Heritage Site, welcomes over two and a half million British and international visitors a year and is also a major centre of education and research. The mission of Royal Museums, Greenwich is to enrich people’s understanding of the sea, the exploration of space, and Britain’s role in world history. For more information, visit www.rmg.co.uk.