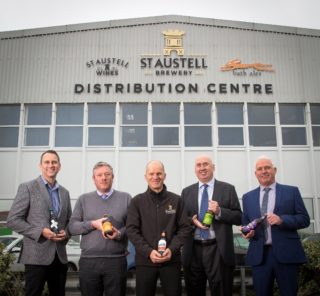 St Austell Brewery has announced the opening of a new 40,000sq ft Bristol-based storage and distribution depot in Avonmouth, creating at least 7 new jobs in the area and bolstering the company’s position as the South West’s leading wholesaler and supplier of beer, wine and spirits.

As work continues on the construction of the company’s £multi-million Hare Brewery investment at the Bath Ales site in Warmley – due for completion in May 2018 – the decision was taken to combine St Austell Brewery’s existing 14,000 sq ft distribution facility in the area and the Bath Ales logistics teams into a larger and more accessible site in Avonmouth.

Commenting on the new opening, Head of Supply Chain Kevin Andrews said, “Once work started on the new brewhouse to double the capacity of the Bath Ales output it was obvious that there would not be adequate space for storage and distribution at Hare House, so it gave us the perfect opportunity to find a bigger and better site to merge the Bath Ales distribution with the existing St Austell Avonmouth distribution team.”

Several factors were considered before the decision was taken to open the new depot in Avonmouth, with accessibility, location and the scope for growth key drivers in the decision-making process. The proximity of the new distribution hub to existing facilities also ensured continuity for customers while the transfer of stocks was carried out.

With increased stockholding and improved service operations, the new Avonmouth depot forms part of a wider strategic move by St Austell Brewery to improve its logistics network and increase its South West coverage, enabling the business to be more responsive to customer needs.

As Kevin explained, “As a company we have a group barrelage target of 170,000 brewer’s barrels by 2020. With double digit growth in the Bristol area and now with a larger distribution centre to work from, we are well on our way to achieving that and another step closer to securing our position as the regional brewer and supplier of choice for the South West.”

The new depot will be managed by Tom Abrahams, who joined St Austell Brewery earlier in 2017 with extensive experience in similar roles at Gregory Distribution and at Heineken.

St Austell Brewery, which is one of only 28 independent family-owned brewers in the UK, was founded in 1851 and is known to be one of the oldest businesses in Cornwall. Best known for Tribute Cornish Pale Ale, Proper Job IPA and Korev lager, the company also owns pubs and inns across the South West.

Bath Ales was founded in 1995. As well as its award-winning range of beers, it also operates a pub estate across Bristol, Bath and Cirencester. In July 2016, it joined the St Austell Brewery family.

St Austell Brewery has committed to building a new £multi-million brewery at the existing Bath Ales headquarters at Warmley, situated between Bristol and Bath. Work has already got underway at Hare Brewery which will more than double current production. Once complete there will be a total brewing capacity of up to 50,000 brewers’ barrels which equates to more than 14.5 million pints. New bottling and canning facilities will also form part of future expansion plans.