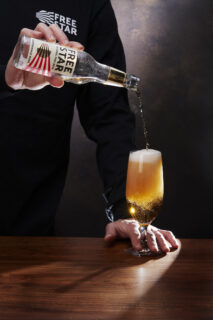 ABVarious definition: People who adopt a more balanced approach to alcohol consumption, using a ‘flexi’ attitude to cut back on their alcohol intake by incorporating low and no alcohol options into their drinking lifestyle

London, 29th July 2020: Following the height of the Flexitarian diet, and the continued rise of vegan and vegetarian lifestyles to improve overall health and reduce impact on the environment, brand-new research reveals the latest consumer tribe to emerge is balanced drinkers, identified as ABVarious.

The new study from alcohol-free beer brand Freestar reveals that 1 in 5 Brits are alcohol-conscious, thinking about their own alcohol consumption, and reducing it, at least once a day, and highlights an emerging trend of UK drinkers balancing alcohol intake by incorporating low and no alcohol options into their drinking lifestyle.

The news comes following the COVID-19 ‘lockdown lock-in’, where almost 1 in 3 Brits were drinking alcohol between four and seven days a week. As we ease out of lockdown, over a quarter (26%) of the UK want to drink less, with 37% of Millennials actively wanting to reduce their alcohol intake following the pandemic.

With half of Brits (50%) feeling that there is less pressure to drink alcohol these days, 2 in 5 people in the UK self-identify as being ABVarious, having a flexible appetite for consuming both alcohol and alcohol-free drinks.

The research reveals that the ABVarious lifestyle is more popular with women than men, with 41% of females adopting a balanced drinking lifestyle compared to 34% of males. Across the UK, Norwich (47%) has the most balanced ABVarious drinkers, followed by Plymouth (46%)and Liverpool (45%).

As the trend for flexi-drinking spreads across the UK, half of Brits (50%) feel there is now less pressure to drink alcohol, with 40% of the UK opting to drink alcohol-free options in nightclubs once they re-open. However, there is still a negative stigma attached to ‘not drinking’ as a third (29%) of the UK say they feel more comfortable drinking alcohol-free options in their own home, compared to when ordering at a bar or restaurant.

The negative perception that still follows ‘non-drinkers’ today is the reason founders Charlie Crawley, Eddy Falls and Felix von Hurter decided to set-up Freestar when out in a London pub in 2017.

Charlie Crawley, Co-Founder of Freestar says: “At Freestar we’re ABVarious ourselves, we’re not teetotal or anti-alcohol, but will often drink a full strength beer followed by a Freestar to balance our drinking. When we set out to create Freestar our aim was to make people feel confident and proud to choose an alcohol-free option, whether an alcohol drinker or not. Our research shows that following COVID-19 more people are re-thinking the amount of alcohol they consume weekly, and are wanting to balance this out with non-alcoholic options that still feel right for social situations or moments to celebrate.

Almost all of the country now has a flexible approach to meat and dairy options following the rise of vegan and vegetarian diets, and now it’s time we apply this approach to what we drink, as much as what we eat. The new tribe of ABVarious drinkers shows the UK is moving away from binge drinking, and looking for products that have a benefit on their mental health, waistline, and of course, the environment.”

The negative perception that still follows ‘non-drinkers’ today is the reason Founders Charlie Crawley, Eddy Falls and Felix von Hurter decided to set-up Freestar when out in a London pub in 2017.

The new tribe of ABVarious drinkers not only illustrates the trend for balanced drinking, but also demonstrates a more mindful approach to drink choice overall. Just as vegan and vegetarian diets have become popular due to the impact on sustainability, almost 1 in 2 (45%) Brits think about the impact on the environment when deciding what they want to drink.

Freestar is a new innovator within the non-alcoholic beer industry which is technically the world’s first truly zero alcohol beer. Unlike other alcohol-free brands who brew their beer, Freestar is made with a unique blending process that uses 98% less CO2, 80% less energy, 80% less water and creates 70% less waste than other brands. Rather than using the traditional brewing process of creating and then removing the alcohol made from the yeast fermentation, Freestar doesn’t use yeast therefore no alcohol is ever created.

The full-bodied and citrusy flavoured beer has a clean and refreshing finish, which led to it winning a 2019 World Beer Award within the UK low alcohol category in its first year of launch. Most recently Freestar announced its certification as a registered B Corp, becoming the first alcohol-free beer brand in the world to be granted the accreditation. Freestar is available to purchase nationwide on the Freestar website and through Ocado, Farmdrop and Amazon.

UK Cities Who Drank The Most Alcohol in Lockdown

The UK’s Ten Cities with the most ABVarious drinkers

The nationally representative survey was conducted by Censuswide on 15th – 16th July 2010 and incorporated 2,001 respondents over 18 years old.

To speak with ABVarious consumer case studies, Freestar founders or third party spokespeople in the on and off-trade industry, please contact the Freestar press team on: freestar@wcommunications.co.uk

For more information on Freestar visit www.freestar.co and on Instagram @freestar

Freestar was set up by three friends: Charlie Crawley, Eddy Dallas and Felix von Hurter, who all left their jobs at Tesla, Propercorn and Sipsmith respectively in April 2019 to go full time creating delicious alcohol-free beer. In 2017 while at the pub, the three friends found that there wasn’t an alcohol-free option that didn’t compromise on taste, which led them to create Freestar – a great tasting alcohol free beer bringing a fresh take to the alcohol-free industry.

Using a pioneering production process, Freestar involves blending water, malted barley and perle hops with other natural ingredients, making it the first alcohol-free beer that has an entirely alcohol-free process. The production involves using 80% less water and creates 70% less waste than other methods, so it doesn’t just taste as great as regular beer, but is created using a much more sustainable and environmentally friendly process.

Freestar’s alcohol-free beer was developed with the help of a World Cup of Beer judge and the beer has since won a 2019 World Beer Award as a UK winner in the low alcohol category.

Freestar is a certified B Corp company and is available to purchase nationwide on the Freestar website and through Ocado, Farmdrop and Amazon, as well as being stocked in some of London’s hottest bars and restaurants such as Ace Hotel, POP Brixton, Kricket, Vinegar Yard, Village Underground and many more.