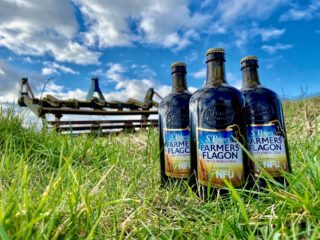 A delicious new ale, Farmer’s Flagon, has launched to mark 100 years of the NFU in Suffolk.

Produced by Suffolk brewery, St Peter’s, the new ale is something very special and reflects the NFU’s dedication to farming in Suffolk over the last century.

“The NFU got in touch with us as they wanted to do something special to mark their centenary and they loved what we do here at the brewery, and the fact that we are in such a rural location, surrounded by fields of barley. They felt the brewery was the perfect fit for producing this special ale, especially as flagon malting barley is grown locally,” explains John Hadingham, MD at St Peter’s Brewery.

“At a time when we are all worrying about bigger things and relying on our British farmers to come up with the goods in the coming weeks, it is fantastic to be a part of something that celebrates the NFU’s role in the continued success of British farming.”

Farmer’s Flagon is a rich pale ale brewed with cascade and progress hops, flagon pale ale malt, rye crystal malt, Munich malt and crystal malt. It has a red/auburn colour and a distinctive spiced and peppery aroma of vine fruits, with a pleasant woody flavour.

“Although we’re going through challenging times, I hope people will join us in raising a glass of Farmer’s Flagon to the farmers, maltsters and brewers whose skills come together to create the perfect pint – and to better times ahead.”

The title for the new ale was the brainchild of Will Sargent, a farmer from Morningthorpe, Norfolk, winner of an NFU competition to name the beer. His prize was £100 to spend at St Peter’s Brewery, as well as a case of the centenary beer.

Will said: “The name ‘Farmers Flagon’ came to me quite quickly. Being a farmer myself, I thought there was a good chance St. Peter’s would use a variety of barley called Flagon, so it fitted in well.

“The word flagon also has another meaning. It’s an old-fashioned drink container and I could just imagine a farmer pouring a pint out of one at the end of a hard day’s harvesting.

“Once I sent off my entry, I forgot all about it, so it was a nice surprise when the NFU contacted me to tell me I’d won. I hope people like the name, enjoy the beer and carry on supporting farmers and local businesses.”

The new ale will be available in East of England Co-Op stores across the region, as well as delis, local farm shops and other independent retailers.
It will also take pride of place on tables at a special NFU Suffolk centenary lunch, due to take place at Trinity Park, Ipswich in November.