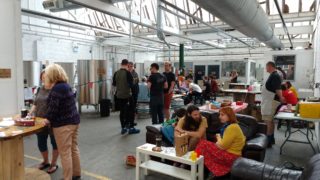 Saturday 15th June is Beer Day Britain and Nomadic Beers will be celebrating it as part of their next Open Taproom event.

“Beer Day Britain is an important day in the British beer calendar, so it’s great that we’re able to help support the event by running one of our Open Taproom’s on the same day” says Katie Marriott, who is the owner of Nomadic Beers.

“We’re open from 12pm until late and we plan to join in with the national ‘Cheers To Beer’ which is happening at 7pm” continued Katie.

Nomadic Beers will also have some special beer available on the day, including their brand-new Table Beer called Little Hobo, at 2.8% ABV.

Head Brewer Ross Nicholson explains more about the beer. “It’s based on one of our previous beers, Hobo. We brewed and dry-hopped it with Mosaic, Citra and Simcoe.”

Also available to drink will be cider, wine and gin, plus soft drinks. Soft drinks are available free of charge, but a small donation to St. Gemma’s Hospice is encouraged.

Food will be provided by Love Kimchi, a Manchester-based Korean street food trader.

“As well as Beer Day Britain, this month our theme is ‘Nomadic Might Have Talent’” says Katie. “It’s time for our guests to provide the entertainment. We’re looking for anyone who has a weird and wonderful talent; prizes will be available!”

The Brewery is in the same yard as Enterprise vehicle rentals, a 15-minute walk from Leeds City Centre & just 3 minutes away from nearby North Brewing Co’s brewery tap room – Here is a map. The brewery is fully accessible.