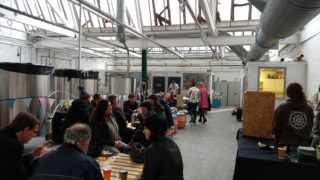 The next Nomadic Beers Open Taproom is taking place during Spring Bank Holiday weekend, on Saturday 25th May, from 12pm onward.

“Every month we open our doors so beer fans can come and enjoy Nomadic Beers from the source and see our brew kit in person” said ‘Gaffa’ Katie Marriott, who is the owner of Nomadic Beers.

“This month we’ll be showcasing a range of our most recent specials. This includes an exclusive one-off cask that won’t be available anywhere else to try, called Running Riot” continued Katie.

Running Riot will be joined on the bar by Personality Crisis, a 4.6% ABV Vanilla Cream Ale (lactose-free). Plus, Filibuster a 4.9% ABV Strong Dark Mild brewed in Collaboration with Nightjar Brew Co and award-winning beer-writer Katie Mather. Baby Bandit completes the starting line-up, a 4% ABV version of Nomadic’s core range beer, Bandit. All the beers are vegan and vegetarian friendly.

As well as beer, there will be cider, gin and wine available to buy. In addition, there will be a range of soft drinks which are free of charge, but a small donation to St. Gemma’s Hospice is encouraged. Food will also be available, including food suitable for vegans and vegetarians.

Like the March Taproom, Hops and Tots will be hosted this month, between 12-3pm. This is a regular event where parents can enjoy craft beer whilst their children play, organised by Becky Pettman.

“After Hops and Tots have finished, we will have some live entertainment from a band called Backstage Brass” said Katie. “They are a 6-piece brass group from Yorkshire, playing all different genres of music.”

Nomadic Beers’ May Open Taproom will run from 12-8pm (ish) on Saturday 25th May, in the brewery at Unit 11 Sheepscar House, 15 Sheepscar Street, Leeds, LS7 1AD.

The Brewery is in the same yard as Enterprise vehicle rentals, a 15-minute walk from Leeds City Centre & just 3 minutes away from nearby North Brewing Co’s brewery tap room – Here is a map. The brewery is fully accessible.