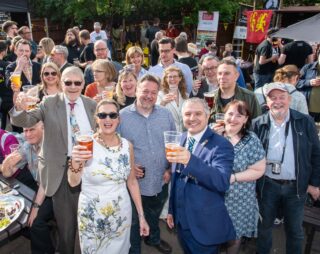 Guild members are cordially invited to the Norwich City of Ale Launch Party on Thursday 26th May: please contact Frances or Laura if you would like a ticket. Contact details at bottom of release.

The 10th Norwich City of Ale festival is almost upon us. The glorious event runs Thursday 26th May to Sunday 26th June.

“It’ll be great to have festival lovers back after a two year break,” says Phil Cutter, co-founder of City of Ale and licensee at The Murderers.

“While it’s been away, our ‘Beer Week’ has miraculously turned into a ‘Beer Month’. That gives people more time to get round the 51 amazing pubs on the trails, and to sip and savour beers from the 27 fabulous local breweries involved.

A ‘Festival of Champions’ at the Waterfront in Norwich on Thursday 26th May will launch the month of ale trails and beer delights.  All the beers on the bar that night will be award-winners – and they will all come from breweries in the region.

“The world’s best barley is grown and malted in North Norfolk,” says Phil, “so it’s hardly surprising that there are so many award-winning beers brewed here. It seemed appropriate for the 10th Festival to have a party of champions – and the aim is to make it a champion occasion for everyone. Come along and taste for yourself!”

Tickets for the Festival of Champions, City of Ale launch party are available from the Waterfront:- https://www.ueaticketbookings.co.uk/ents/event/10926/ . Roger Protz, renowned beer writer and former editor of the Good Beer Guide, will open the Festival.

Individual pubs will be organising events throughout the month, but the main focus this year is on Ale Trails. These encourage visitors to explore the streets and alleys of Norwich, discovering bits of history, art and architecture – and gems of pubs – that they might otherwise have missed.

Norwich City of Ale beer week was founded by Phil and Dawn Leeder. “It all came about because we both love our city,” says Phil. “We wanted pubs here to thrive; and also wanted to see the brilliant beers from our region being celebrated.”

It was the first ‘beer week’ of its kind, and the model has now been replicated across the country “Much of the success has been down to Dawn’s energy and commitment, all given on a voluntary basis. She shaped the Festival and put Norwich as a beer destination firmly on to the map.”

Dawn stepped down after nine years co-chairing City of Ale with Phil and her role has been taken on by the energetic David Holliday from Norfolk Brewhouse, a long time supporter of Norwich City of Ale.