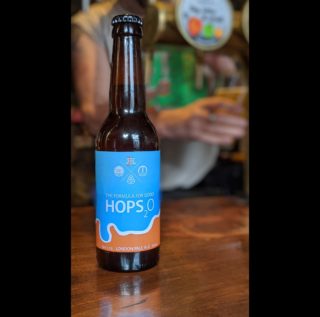 A total of 250 brewers from 173 cities in 24 countries will simultaneously release unique, small-batch beers to bring clean water to developing countries – and Moncada & Thames Water are taking part with Hops2o!

A video and images of the brewday can be seen here: https://corporate.thameswater.co.uk/media/News-releases/News-Release—Thames-Water-beer

It’s all part of Brewgooder’s mission to bring clean drinking water to one million people in developing countries. The craft beer community launched its biggest campaign yet, the Global Gathering, which will take place on the weekend of World Water Day (March 20-22 2020).

The collaborative project has received backing from brewers as far afield as Australia, California and Hong Kong, as well as more than 150 breweries from across the UK.

Moncada Brewery have teamed up with Thames water to not only release the beer, but also to name it and even brew it – with hundreds of votes being cast by Thames Water employees suggesting names for the limited edition release beer and a chance to win a brew at the Brewery and tap room based now in Dollis Hill.

Each Global Gathering brew will raise more than £500 towards a fundraising target of £250,000 for the overall campaign. All proceeds will be donated to The Brewgooder Foundation and spent on its clean water projects in 2020/21.

The Moncada team decided to approach Thames Water to partner with them on the project as the issue of global water poverty is prevalent in both businesses charitable campaigns, with Thames Water aiming to raise £2m for global clean water projects over a four year period.

“I couldn’t think of a better brewing partner than Thames Water” said Brewery Manager, Nigel Tarn. “Water is an often overlooked ingredient in the brewing process, gaining less attention than the malt or hops, and yet it is paramount in developing the character and taste of the beer” said Tarn. “Thames water produce our largest single ingrediernt in our beers, and we’re lucky here to have quality water in such abundance, when in countries such as Malawi fresh drinking water is dangerously unavailable”.

The packaging design for each collaborative beer will be inspired by the theme ‘water’ and designed by each individual brewery using Brewgooder’s two distinct colours – orange to represent beer and blue to represent water. Every beer will be released simultaneously at participating venues on the weekend of 20-22nd March 2020, to mark World Water Day.

To find out more and join the movement, visit www.brewgooder.com/gathering

Thames water’s collabotation beer brewed with Moncada Brewery will be avialiable from the 20th March in Pubs across London, in selected pubs further afield, from Moncada’s Tap Room Bar in Dollis Hill and as take aways in bottles from all good bottle shops and direct from the Brewery.

Alan Mahon, Brewgooder’s founder, said: “The Global Gathering shows what the craft beer community is capable of when we collaborate and use our shared passion to make a positive impact. It’s the beginning of a worldwide movement.  By working together, we will help empower 100,000 people by giving them clean water, something the rest of us take for granted, and something the beer industry depends on.

“To have 250 brewers from across the world get behind our mission is incredible, I can’t thank each and every one of them enough. They will not only make people happy with their amazing, unique beers but also impact thousands of lives around the world.

“There are far too many people in developing countries who have their ambitions, dreams and potential limited by lack of access to a safe source of water. By providing clean, accessible water, we can help kids grow up healthier, stay in school longer and build better lives.”

Previously, Brewgooder has worked with BrewDog (who will also be releasing a special beer for World Water Day) on their flagship beer “Clean Water Lager”, on small batch beer collaborations with 100% of profits going to support over 130 projects in Malawi.

These projects include well rehabilitations, new borehole construction, sanitation systems and water mapping to ensure the long-term sustainability of well constructions. Through the Brewgooder Foundation, the projects have already positively impacted 65,000 lives and counting.

To find out more and join the movement, visit www.brewgooder.com/gathering