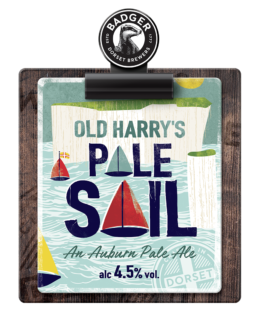 Badger Beer, from Hall & Woodhouse, brewed in Dorset since 1777, is bringing back its Old Harry’s Pale Sail, a refreshing auburn pale ale, for the summer months, following its huge success last summer.

Bursting with floral and citrusy aromas, the beer contains Goldings, Jester and Amarillo hops, and Flagon, Crystal and Munich malts, creating a thirst-quenching ale which is perfect for the warmer months.

Old Harry’s Pale Sail is available as a seasonal cask ale in select Hall & Woodhouse public houses across the south of England from the beginning of August until the autumn, supported by PoS kits including posters and tent cards.

“We are delighted that Old Harry’s Pale Sail is returning for the summer months, following its phenomenal success last summer. Old Harry’s Pale Sail is inspired by Old Harry Rocks, which is an iconic set of rocks along Dorset’s Jurassic coast.* All sorts of legends surround the rocks, most notably about an infamous pirate named Harry Paye, whose ship is said to have hidden behind the rocks awaiting passing merchantmen, and after whom they are named.

“The refreshing ale is available from this month across 140 of our public houses in the south of England. With its floral and citrusy aroma and light hop notes it works extremely well as a refreshing, summer ale both on its own and as an accompaniment to food.”

* The rocks are three chalk formations, including a stack and a stump, located at Handfast Point, on the Isle of Purbeck. They mark the most easterly point of the Jurassic Coast, which is a UNESCO World Heritage Site.