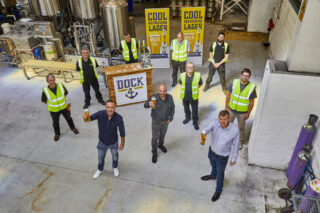 Manchester TV star Will Mellor has thrown his weight behind a campaign to recognise the importance of the city’s heritage businesses – starting with Hydes Brewery.

The company, which was founded in 1863, has through its 150+ years of history, survived great wars, historical events and now a pandemic, looking forward to the future it has invested in a new keg and craft production line which is launching this summer.

Will got to see the operation first-hand on a tour of the Media City-based brewery and even visited The Friendship Inn, buying drinkers a pint of the company’s newest product, Dock 4 lager, to mark its launch.

He said: “Everyone knows I am passionate about Manchester, – these are places where generations have worked and played, and they are a key part of people’s happy memories.

“I really enjoyed touring the Hydes Brewery and seeing the way they have modernised a company with such amazing history – and then raise a glass with their customers. Hopefully, people in the region will get behind them, allowing their business and the new product to be a success, so they will still be here in another 150 years’ time.”

Dock 4 Lager is an appreciation to the city’s rich heritage, taking its name from the key part of the Port of Manchester and will be available in Hydes’ Community Pubs.

Hydes Managing Director Adam Mayers was on hand to show the Coronation Street star the Company’s newest offering and believes they couldn’t have had a more fitting guest.

He said: “Manchester is lucky to have Will, he is passionate about the city and really cares about its success – it is great to see him appearing in Corrie which is another of the city’s long-established creations.

“Two Pints of Lager and a Packet of Crisps is still an absolute cult favourite, and I think the drinkers at our pub were quite surprised when one of the cast from a TV show most synonymous with lager was turning up to a buy them a pint of the new Dock 4!

“There has been constant rumours of ‘Gaz and Jonny’ returning for a Two Pints special, so maybe we can persuade them that Dock 4 should be their no.1 tipple of choice!”