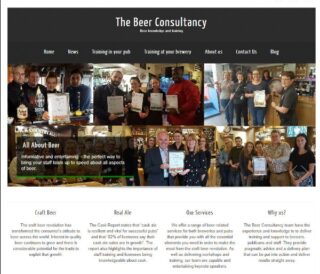 It has been a busy week of online events for Guild member Brett Laniosh who runs a beer training consultancy.

Two days later on Saturday 20th, Brett was Master of Ceremonies at the Great British Beer Festival Winter Beer Debate. On the panel were Sophie de Ronde, Head Brewer at Burnt Mill Brewery and founder of the international women’s collaboration brew day; Tim Webb, the beer consumer champion and award-winning author of The World Atlas of Beer; Emma Inch, the British Guild of Beer Writers 2018 Writer of the Year and creator of award-winning Fermentation Radio podcast and Stuart Bateman from Batemans Brewery, whose great-grandparents started brewing at the legendary Lincolnshire brewery in 1874.

Finally on Tuesday 23rd, Brett worked with Will Taylor from Woodcote Brewing in Bromsgrove to run a very popular online tasting of their beers and provide a virtual tour of the brewery site in North Worcestershire.

Find out more about the Beer Consultancy and how it supports pubs and breweries by running online brewery tours and tastings at https://beerconsultancy.co.uk