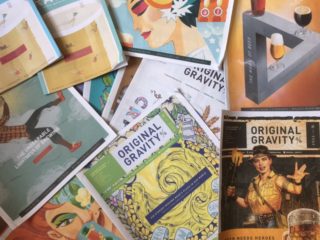 When Daniel Neilson created Original Gravity at the end of 2014, his vision was for a different kind of beer magazine, one that was like ‘your slightly more knowledgeable best mate, full of interesting, readable stories that appealed to both beer novice and expert’. It has always been singled out for the design by Adam McNaught-Davies (lindoneast.co.uk).

Pulling together a quality print magazine that consistently lives up to expectations is a lot of work — too much for one person. So at the start of 2017, Daniel brought on board award-winning beer writers Adrian Tierney Jones and Pete Brown, as editor and editor-at-large respectively. As a team of three, we raised our ambitions even further, with a lofty mission of attempting to become ‘the New Yorker of beer’. Big goals should always be out of reach — you have to try much harder to reach them, and we think we made some big strides, introducing fresh and incredibly talented voices to beer who had real human, engaging, often moving stories to tell.

OG is distributed to quality bars and pubs and is free to pick up. Every penny of production costs has to be met by advertising. We pay the writers we commission and hopefully, there may even be some profit left to split between the three of us. Achieving the required amount of ad revenue has been getting increasingly difficult. We don’t press the ‘Go’ button until we know there’s a surplus. Original Gravity #23 was due to drop in September, but it didn’t hit that surplus.

For the moment then, the UK print edition of Original Gravity is temporarily on hold (the Canadian edition launches in Alberta as well as Ontario next year). We still believe the model works, but we need to take time out and rethink it in the UK. In the meantime, we’ll be publishing original content on originalgravitymag.com, including commentary on issues in beer that we feel we want to talk about (as well as continuing with occasional Original Gravity Live events). At the moment there is no budget for new writers, so it will be Pete Brown and Adrian Tierney-Jones who will be putting in the words, which means that the message of OG that has been there from the start — independent, asymmetrical, unconventional — will still be heard.

A big thank you to all the advertisers, distributors, stockists, writers and readers who have supported us so far. We’re not giving up. And we’ll let you know as soon as OG is ready to return to print.