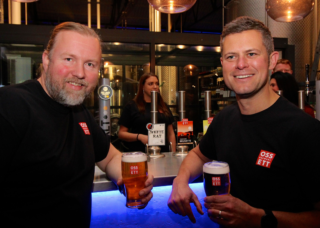 Yorkshire’s innovative Ossett Brewing Company has unveiled a contemporary new look for the 21 year old brewery at the launch of a modern tap room and visitor centre.

Building on a series of major capital investments in recent years, the vibrant new rebrand ‘brings a more contemporary, bold and inclusive look that pays homage to the rolling countryside of the Ossett’s Yorkshire heartland’. It will roll out across pump clip designs for the core range, seasonal beers, the company logo and POS (point of sale) materials.

The new taproom and visitor centre opens to the public on Friday November 15. With a capacity of some 80 to 100 people it will serve as both a taproom a venue for live bands and social events. Brewery tours will be offered and it will be available for hire for weddings, family celebrations and corporate events.

Alex Minett, managing director, said: “Ossett is a progressive and passionate independent brewery. Borne of family values, team work and integrity our beers have been crafted over two decades. We’ve perfected the science of producing ales of consistently high quality and honed the art of brewing beers that are accessible to all. Now our creative new branding will reflect these core values, while, with the new brewery tap, both our loyal followers and beer enthusiasts new to us will be able to sample our award winning beers in the heart of the brewery.“

Ossett has invested more than £3m over the past two years in brewing capacity, warehouse facilities and equipment and new packaging resources, together with the new SALT Beer Factory at Saltaire, Bradford. SALT is a hop forward micro-brewery and entertainment venue in a Grade II Edwardian tram-shed at the heart of the UNESCO World Heritage village.

Leading Ossett brands Yorkshire Blonde, Silver King and Excelsior are sold across the brewery’s own estate of 27 pubs alongside hundreds of free trade accounts and through selected wholesalers. Ossett has won five national and a host of regional awards since the brewery’s inception in 1998.

Co-owner Jamie Lawson, said: “Our new tap room will be the cherry on the cake of a journey in recent years to invest in our future. It will showcase our achievements and our beers in their finest form. And our imaginative and inclusive new branding will shout out that we are a very forward looking and very proud Yorkshire company.”

Ossett Brewing Company was founded in 1998 by brewer Bob Lawson and quickly became famed for its single variety hopped pale beers. Today Ossett has a group turnover of £17m and a workforce of over 400 local employees.

Brewing capacity is currently 420 bbl (brewer’s barrels) per week plus 50bbl from four microbreweries: Riverhead in Marsden; Fernandes in Wakefield; the Rat at the Rat and Ratchet Brewery, Huddersfield, and SALT Beer Factory at Saltaire. The fledgling SALT Beer Factory recently toasted a double success in the fiercely contested World Beer Awards 2019. The innovative micro-brewery scooped UK gold medal in the WBA’s Black IPA class with ‘Answer is None’ (7.2% abv) and UK bronze for American IPA with ‘Alpaca DDH IPA’ (6.6% abv). Both winners were first brewed only in March this year.

Ossett has a mix of 29 community, Hop music pubs and Craft Asylum bars across Yorkshire and delivers directly to hundreds of pubs throughout northern and eastern England and nationally through leading wholesalers. Core brands are: Brunette Blond, Excelsior, Silver King, and Yorkshire Blonde. Ossett’s first pub – the Black Bull at Liversedge – opened in May 2003. There are now Ossett pubs across Yorkshire including:  Huddersfield, Halifax, Sowerby Bridge, Mirfield, Knaresborough, Dewsbury, Leeds, Sheffield and York as well the home area of Wakefield.