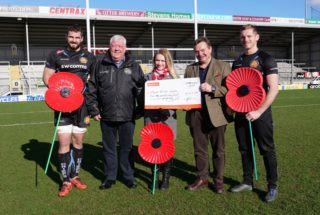 One of Devon’s leading breweries has presented a cheque to the Royal British Legion at the home of England’s reigning Premiership Rugby champions. Otter Brewery and the Exeter Chiefs joined forces in November to help raise money for the 2017 Poppy Appeal. During the club’s Anglo-Welsh Cup match that month against Northampton Saints, 5p from every pint of ‘Hiawotter’ (the resident Otter beer at Sandy Park) sold across all of the stadium bars was allocated to the Poppy Appeal.

The brewery also continued its long-standing tradition of donating 5p from every pint of Poppy Otter sold in pubs throughout Devon, Dorset and Somerset in November and December. The total raised from the combined beer sales was £1,505.27 and this has now been presented to the charity on the pitch at Sandy Park.

Claudia Kelly, Community Fund Raiser for The Royal British Legion, said “On behalf of Devon Poppy Appeal, I would like to thank Otter Brewery and Exeter Chiefs for this very kind donation towards The Royal British Legion. The money raised will make it possible for us to provide much-needed help and support to the many thousands of Serving and ex-Service men and women who call on us in their hour of need. Support like this is invaluable and we are grateful for the help they have so generously given and look forward to continuing our partnership”

General Manager at Sandy Park, Natasha Pavis, said: “As a Club, we always commemorate Remembrance Day, and it is great that this time we were able to make the most of our partnership with Otter Brewery and do something extra towards the Poppy Appeal.”
Patrick McCaig from Otter Brewery commented: “We share a very close personal affinity with the values the RBL hold dear and an added bonus for us is that all the money raised locally is then used locally. In the last eight years Poppy Otter has now contributed £12,500 to their regional efforts. Rugby’s also very much in our veins so having the Chiefs involved this time around is something extra special given our long ties with them. A big thank you to the fans who helped and to all our drinkers across the South West.” Now into its 28th year, Otter remains a family run business and is proud to support a number of other local charities including Hospiscare, Devon Air Ambulance and The Exeter Foundation as well as many grass sports clubs and community festivals.