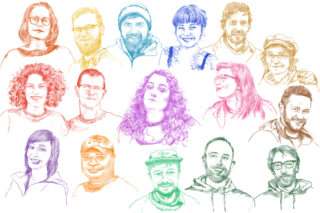 Pellicle—the independent beer, wine and cider magazine founded by writer Matthew Curtis and brewer Jonny Hamilton—has unveiled its annual list of “Trendsetters & Trailblazers” for 2021, with accolades awarded to some of the beer industry’s movers and shakers.

Published annually, Pellicle’s Trendsetters & Trailblazers aims to celebrate individuals within the worlds of beer, wine and cider whom the magazine believes will have great influence on their respective industry in the year ahead. This year features a selection of 16 individuals and business partners, as chosen by Curtis, Hamilton and regular Pellicle contributor Katie Mather.

Among those nominated are Christian Townsley and John Gyngell of Leeds-based North Brewing, Daniel Tapper of Beak Brewery in Lewes, Sussex, and Stacey Ayeh of London’s Rock Leopard Brewing Co.

“Announcing our annual list of Trendsetters & Trailblazer is such a joy, and generates such a buzz,” Curtis, Pellicle’s editor-in-chief for beer and cider, said. “This year it feels more important than ever to highlight that—despite our current circumstances—there are still people in beer, wine and cider pushing ahead for both themselves and these industries.”

Topping this year’s list is none other than the British Guild of Beer Writer’s newly-crowned Beer Writer of the Year, Lily Waite. In her nomination, Pellicle has tipped the her for yet more success in the year ahead as her beer brand—The Queer Brewing Project—launches its first core beers and continues to expand its reach within the United Kingdom and beyond.

“I’m absolutely floored by not only in my inclusion on this list, but also by Matthew’s kind and moving words,” Waite added. “As ever with these lists, it’s an honour to be included in such brilliant and powerful company!”

The full list of the magazine’s Trendsetters & Trailblazers for 2021 can be found online at www.pelliclemag.com, here.

Editors Note: Pellicle is a magazine and podcast devoted to exploring beer, wine, cider, food and travel and the joy we find within these cultures. Created by writer Matthew Curtis and brewer Jonathan Hamilton in 2019, the magazine aims to capture the joie de vivre we so often find within our favourite cultures.

For further details or other enquiries about Pellicle, please contact Matthew Curtis directly on matthew@pelliclemag.com