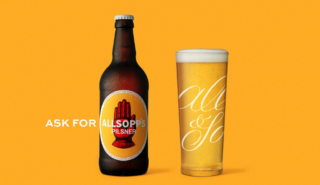 Allsopp’s Pilsner, once sold all over the world and advertised as ‘The Best Drink Under the Sun’ is being relaunched this June across e-commerce, the on-trade and retail.

123 years after it was first brewed by the prodigal Percy Allsopp, Samuel Allsopp & Sons is bringing his pioneering, crisp and refreshing Pilsner back for the modern drinker’s enjoyment.

In the late 1890’s Percy built England’s largest lager brewery to brew Burton’s first lager. He acquired a seaside resort and an expensive pub estate, advertised with zeppelins and put on festivals to entice England’s drinkers. Rather premature, as no one had acquired the taste for lager yet. This unfortunate oversight led to collapse of the company and subsequent merger with Ind Coope. Over the decades his beer was adapted and brewed in different guises and sold all over the world, one iteration being Skol, but we have gone back to Percy’s original.

Bitten but not shy, Allsopp’s have unfinished business with the ‘Wee Yella’ as it affectionally came to be known in the 1920’s.

Seven times great grandson of pioneering brewer Samuel Allsopp and re-founder Jamie Allsopp’s says: “My ancestor Percy Allsopp, travelled across Germany to learn about lagering and designed a cutting-edge lager brewery in New York to have it shipped to Burton on Trent. He has been described as a prophet and visionary for foreseeing the British demand for lager; only he invested in it 60 years too early. Now the country’s thirst for lager is well and truly established, we hope our version of his Pilsner is a worthy manifestation of Percy’s prophecies.”

Expect delicate malt notes reminiscent of bread and honey. This is balanced by a clean bitterness stemming from the classic Hallertau Hersbrucker hop.

The clean bitterness of this Pilsner contrasts well with seafood and spicy food.

ALL FOR THE TASTE

About the brewing, from Jamie Allsopp:

“Right from the beginning, I knew I had to have our old lager back in the range. Luckily, we have a wonderful old leather-bound ledger with the original Allsopp’s recipes handwritten within. With the help of Burton brewing expert Jim Appelbee, and many test brews, we have landed on a truly modern Pilsner that is a faithful tribute to Percy’s original Pilsner – crisp with ‘wholesome refreshing qualities’ – as a 1900’s advert declared.

Bringing Allsopp’s beers back to life continues to be an extraordinary journey for re-founder Jamie Allsopp as he develops his family’s original recipes with some of the best and brightest brewers across the country.

“Relaunching Allsopp’s beer after over 60 years in the wilderness and seeing it in drinkers’ hands in pubs across the country is incredibly rewarding. Apart from our pilsner we are proud to be brewing quality cask ale and positioning it to be attractive to a drinker new to the category.

One thing is certain, from traditional cask ales to modern craft beers, there is an incredible diversity of quality beers out there. It’s a real honour for Allsopp’s to be welcomed so warmly back into the great British brewing community.”

1934 (88 years ago): Samuel Allsopp merged with next door neighbour Ind Coope to form Ind Coope & Allsopp Ltd., the Red Hand was adopted as the merged company logo. The brand’s merger with Ind Coope and subsequent company sales did mean that the family lost ownership of some of the logos and trademarks. The brand is now entirely back in the hands of the Allsopp’s family with all assets having been bought back from Carlsberg & BrewDog and others.

1959 (63 years ago): The company changed name to Ind Coope Ltd., for advertising purposes Allsopp was dropped for good. The Red Hand trademark fared better and would feature on Double Diamond and Draught Burton Ale branding into the 1990s.