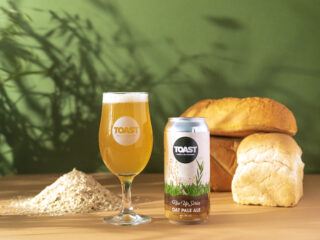 ●  Oat Pale Ale is a collaboration with plant-based brand Rebel Kitchen  as part of Toast’s Rise Up campaign for COP26.

●  The beer launches for UN World Environment Day and celebrates #GenerationRestoration, a global movement to restore ecosystems everywhere for the good of people and nature.

Craft brewery Toast Ale has released a new beer for World Environment Day, a global movement to transform our planet.

A collaboration with plant-based brand Rebel Kitchen,  the beer focuses on how we can halt environmental damage by reducing food waste and restore the health of people and the planet through regenerative approaches.

World Environment Day is campaigning for ecosystem restoration. Though we can’t turn back time, we can get active now. The UN sets out actions we can take, including growing trees, greening our cities, rewilding our gardens, changing our diets and cleaning up rivers and coasts. We can also change the way our food is produced and stop wasting it.

Oat Pale Ale is a limited-edition beer brewed with surplus fresh bread (as is Toast’s signature style) and surplus organic oats that would otherwise have been wasted. It prevents food waste and produces a beer with the lowest environmental footprint.

Toast’s beer is the fifth in its Rise Up series of collabs with other B Corps, which raises awareness about the environmental impact of our food and the benefits of supporting better, healthier ways of producing it.

Beer lovers can do their bit by enjoying a cheeky pint. It’s a hazy, juicy Pale Ale with peach aromas and a spiced bitterness to balance the sweet, creamy oats. All profits go to the environmental charity Feedback  to support campaigning work in the lead up to COP26.

People can also write to their MPs to ask for food to be on the agenda at the COP26 UN Climate Change conference in November (there’s a simple form at toastale.com/riseup).

Louisa Ziane, Toast’s co-founder & Chief Operating Officer, said “We wanted to create a beer that helps to raise consciousness about a way of farming that is better for the planet and our health. Collaborating with Rebel Kitchen, who are also on a regenerative journey with their range of plant-based milks, has been a brilliant way for us to learn more and share that with others over a delicious beer.”

Ben Arbib, Founder of Rebel Kitchen said, “At Rebel Kitchen we do things differently – from our no-compromise dairy alternative Mylk, to our sustainability practices, we never settle. Regenerative, sustainable and organic agriculture is therefore at the heart of our business as we believe in giving consumers no compromise choices that are better for the planet.”

“We’re incredibly proud to be part of this collaboration with a fellow B Corp, Toast Ale, to help raise awareness of the importance of regenerative agriculture. It’s a delicious beer and we can’t wait for all Rebels to get their hands on it!’”.

It’s time to Rise Up over a beer that does the world of good. The beer will be available at toastale.com  from (from £3.50 per 440ml can) and at independent retailers.


In the lead up to COP26, Toast is releasing a series of limited edition beers with fellow B Corps Divine Chocolate, teapigs, Hobbs House Bakery, Oddbox, Flawsome! Drinks, Rebel Kitchen, Rubies in the Rubble and Cafedirect. Each beer will highlight an element of the ecological crisis, and change needed to the food system to meet the goals set in the Paris Agreement.

Toast open sources a recipe for home brewers and collaborates with breweries all over the world to scale its impact. All its profits go to charities fixing the food system. Toast is a social enterprise, the first UK brewery to become a B Corp and winner of the 2021 Queen’s Award for Enterprise for Sustainable Development.

Rebel Kitchen is revolutionising food for everyone. Sustainable, healthy, plant-based alternatives that taste mind-blowingly good, Made by Rebels. Rebel Kitchen has been a B Corp since 2017, is a 100% carbon neutral business, vegan certified by the Vegan Society and a member of 1% For The Planet Foundation, donating 1% of revenue to regenerative agriculture projects.