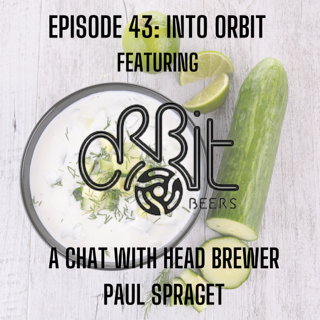 In this episode, Stephen is joined by Paul Spraget, head brewer of Orbit beers who are based in Walworth London. Stephen recorded this show as part of a mini series over the course of summer focussing on some of the UK’s best sour beer producers, which Paul & Stephen discuss during the show.

Paul discusses his employment history with numerous different breweries, and how he came to be at Orbit, bringing along with him the idea for a tzatziki sour which we drink whilst recording. We also try their basil sour, basziki, afterwards which Paul discusses and tries for the first time since bottling this new beer. Huge thanks to Paul for joining me on the show and Orbit for sending the beers out to me to drink whilst recording. The beers being sent of course did not affect my judgement of them and I can highly recommend both of the sours if you ever find them in a bar in London or if you visit their tap room.

If you have any questions, comments or feedback for this or any other show, please send it to pointsofbrew@gmail.com or get in touch on Instagram, Twitter or Facebook.

Press release from Points of Brew