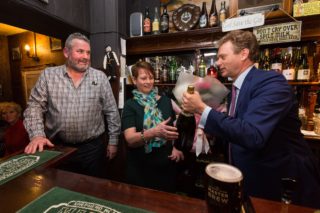 Pub regulars, friends and colleagues turned out in force on Monday evening to say a fond farewell to husband and wife team Chris and Marie Annand, who after twenty years as Shepherd Neame licensees are retiring to Spain.

They started out as landlords at the old Mechanics Arms, West Street in 1998 before their first stint at the Bear. After six years at the George at Newnham, between 2005 and 2011, they returned to the famous old Market Place pub.

Chris said: “We’ve got a place in Spain, and although we don’t really want to leave the trade, now seems a good time to make the move.”

The Bear is a rare surviving example of a three-bar public house, and Chris thinks this is part of its enduring charm.

“The Bear is unique because it hasn’t been opened out, it hasn’t been knocked around,” he said. “It’s Grade II listed and there aren’t many pubs left like this. It is a real community pub in the heart of town.”

Chris puts the couple’s continuing success at the pub down to a mixture of determination and understanding the customer.

He said: “If you stick to your guns, while allowing for change when it’s needed, you’ll be alright. You need to give people what they want, but under your own rules. The best advice we were ever given was when we took on our first pub, and that advice was to treat the pub like your own living room.”

Chris and Marie’s last day at the Bear will be April 3, but the pub will be staying in the family. The new tenants are Lacey and Tim Stowell. Lacey is Chris’s niece.

“Lacey has worked for us before at the George, and she’ll be good for the Bear. She’ll tweak the pub a little bit, but we have a good team of staff and I’m sure she won’t make too many changes.”

Shepherd Neame Chief Executive Jonathan Neame joined regulars at the Bear to say goodbye to Chris and Marie. He praised Chris and Marie for their “real people skills” and for helping to “sustain the beauty of conversation.”

He said: “Chris and Marie have been a huge part of the life of Faversham for almost 20 years. They have run the Bear superbly – twice – providing brilliantly kept beer, great home cooked food, and a very warm welcome. They are immensely popular with their regulars and it is hard to imagine the pub without them.

“We thank them for all their hard work and wish them well in the next stage of their lives. We look forward to welcoming Lacey and Tim as new licensees.”

The Bear Inn is the oldest surviving pub in Faversham and is recorded as trading on the current Market Place site by the mid-16th Century. It was acquired by Shepherd Neame in 1736.