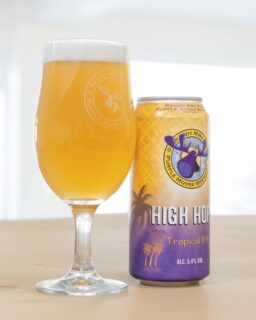 Multi-award-winning Purple Moose Brewery has ventured into the canned craft beer market, with the launch of a delicious tropical IPA – High Hops.

Since 2005, the quirky Welsh brewers have brewed millions of pints of their traditional ales, lagers, and stout, gaining a reputation for quality and consistent beers.

In June 2021, the younger team members at the brewery expressed their interest to brew a fruity India Pale Ale as a summer special. The result was their fastest-selling seasonal beer to date.

According to managing director Lawrence Washington, High Hops signifies their first step towards expanding their range into the exciting craft beer realm:

“When we finished brewing the first batch of High Hops, I knew we had something very special. A tropical IPA is completely different from the styles of beers we’ve brewed over the years, and we didn’t know how it would be received by our customers, however, we sold out of the casks within 48 hours. From that point, we knew we had the perfect contemporary beer to become our first canned product.”

Lawrence reassures they’ll always brew their established real ales for cask and bottles. By developing a range of modern-style beers alongside High Hops, the two ranges will complement each other and offer customers a style to satisfy all tastes.

“The release of our first canned beer has given us the excitement we needed after the difficulty of the past 18 months. We’re already working on developing a range of craft beer for cans, with our second canned beer already on its way and due to be released before Christmas.”