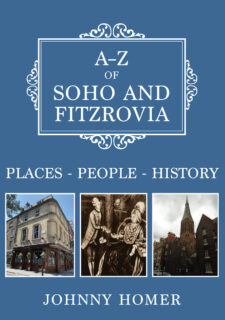 A new book by the late Shepherd Neame Communications Executive Johnny Homer, an acclaimed writer and broadcaster, has just been published posthumously.

A-Z of Soho and Fitzrovia is Johnny’s 8th published book. Johnny, 56, lived in Whitstable and worked for Shepherd Neame for eight years. He died in July 2021, leaving wife Lydia and daughter Harriet. Before joining Shepherd Neame Johnny worked as a journalist and was also a popular broadcaster, best known for his regular contributions to The Robert Elms Show on BBC Radio London during the past two decades.

From Karl Marx to Mozart, Casanova to Jimi Hendrix, the inventor of television to the man who introduced the espresso machine into England, A-Z of Soho and Fitzrovia offers an irreverent insight into two of London’s most vibrant and bohemian neighbourhoods.

Divided geographically only by Oxford Street, they can both boast a fascinating and occasionally dark history. Today, Soho is at the centre of the capital’s Theatreland and entertainment scene. Here are the theatres, shops, clubs and restaurants, together with the streets, squares and alleyways that bring the city to life during the day and at night. Soho has long been London’s playground, a place of illicit pleasure, high and low culture, pubs, brothels and gangland feuds. It is a unique melting pot of cultures and influences, and the location of iconic places such as Carnaby Street, Ronnie Scott’s jazz club, the Windmill Theatre and home to Private Eye magazine.

Fitzrovia is perhaps more refined; a district of fashion houses, advertising agencies and the BBC. In the past it had a bohemian reputation, and was home to authors including Virginia Woolf and George Bernard Shaw. Discover more about famous residents and notable venues such as the Fitzroy Tavern, the UFO Club, and the landmark Post Office Tower.

A-Z of Soho and Fitzrovia is available now, priced £15.99, from https://www.amberley-books.com/a-z-of-soho-and-fitzrovia.html

Shepherd Neame has been based in the market town of Faversham, Kent for over 300 years. Perhaps best known for great British classic ales such as Spitfire, which carries the Royal Warrant, its diverse portfolio includes Five Grain Lager, Bear Island East Coast Pale Ale and Bear Island Triple Hopped Lager, and the Whitstable Bay Collection. It also brews international lagers under licence including Samuel Adams Boston Lager, and is the sole UK distributor for premium Thai lager Singha. The independent family business boasts an award-winning visitor centre and more than 300 pubs and hotels throughout London and the South East, from the historic heart of the City to the Kent coastline.