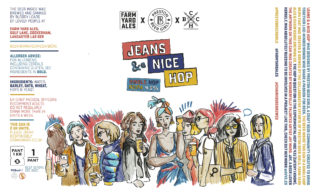 The beer, “Jeans & A Nice Hop”, will be available on keg, cask and in cans at selected bars in Preston, Lancaster, Manchester and around the North West.

In August 2019, Preston Beer Girls met for the first time to discuss the important things in life — beer, pubs and community.

Following in the footsteps of women’s beer groups around the country like Beer Without Beards in Edinburgh and Ladies That Beer in Liverpool, Preston Beer Girls was founded to encourage women to try and enjoy different styles of beer and to learn more about it too. It’s aim as a social group is to show that beer is just as much “for women” as it is “for men”, and that there is a style of beer for everyone — no matter your tastes.

For their first event, every member of Preston Beer Girls voted unanimously that they would love to brew their own beer. This amazing brew day experience was led by the team at Farm Yard Ales in Cockerham — where Preston Beer Girl member Georgia Hollis is Brewer and Process Assistant. The whole brew day was also supported by Ryan Hayes from Chain House Brew Co. in New Longton. Ryan was an important collaborator on this beer, and developed the recipe with Georgia.

“We organised questionnaires and polls to find out which beer style, hops and ABV (strength) the group would prefer to brew, and then everyone voted on what they’d prefer to make.”

“Once the beer recipe was decided on, the group came to the Farm Yard Ales brewery and spent the day mucking in with the brewing process with plenty of beer tastings in between the jobs. This means that Jeans & A Nice Hop was brewed by a collective of more than 30 people!”

The beer is a 4.5% NEIPA using a new experimental hop from the US called HBC 431. This hop was chosen for its herbal aromas and fruity character that lends flavours of peaches, berries and tropical fruits to the beer, as well as refreshing citrus notes and a touch of bitterness.

The stunning artwork for the can and keg taps was designed especially for the Preston Beer Girl collaboration brew day project by self-confessed beer girl Jay Ward (who’s artwork you can also find on Farm Yard Ales’ “Let Them Drink Cake!” beer).

Emily Livesey, co-founder and one third of the Preston Beer Girls’ organisational committee along with Emma Pulsford and Kally Schubert, said:

“We’re so proud of how quickly our group has grown. We began Preston Beer Girls because we love beer, but it’s still seen as a little strange for a woman to choose beer over a G&T or a wine around here. We wanted to get more ladies interested in the great beer that’s being brewed in the North West and around the country and every month we see more and more people turning up to our meeting. It’s such a thrill to get everyone talking to everyone about beer, our favourite pubs and to get tips on beer-related trips, events and forthcoming releases too.”

“We’re really proud of our beer, it’s tasting great and I love the name we chose too — it’s a bit of a joke based on a conversation a lot of women will relate to: “What’re you wearing tonight?” “Not sure… jeans and a nice top?””

“To launch the beer we’ve decided to run a pub crawl around some of the great pubs in Preston where our beer will be sold on Friday the 6th of December. We’ll be starting the evening at Plug & Taps on Lune Street, where the Beer Girls host their meetings each month, moving on to The Orchard before finishing at Plau Bar.”

Notes for the editor:

Preston Beer Girls is a new group for the ladies of Preston and its surrounding areas to share their love of beer. Meet-ups are held on the last Tuesday of each month at 7pm at Plug and Taps bar on Lune Street, Preston.