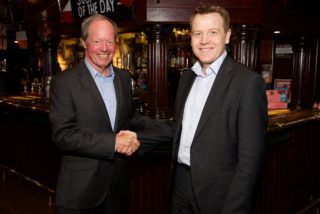 PubAid, the organisation dedicated to promoting pubs as a force for good, has welcomed Greene King as its first ever Patron.

PubAid receives funding from a number of supporters, with Greene King becoming the first to commit at the highest level of £5,000 per year for three years.

PubAid co-founder Des O’Flanagan said: “We’re delighted that Greene King has stepped up to be a Patron and are grateful to all the pub companies, brewers and others who have supported PubAid over the years.

“To enable us to plan for the longer term, we are seeking support guaranteed for three years, with a choice of funding levels. This will allow us to be more ambitious with our plans to raise the profile of pubs as a force for good in their communities and wider society.

“Pubs raise more than £100 million for charities every year and support grassroots sport to the tune of £40 million; we think these are impressive figures that everyone in the pub industry should be proud of, and more people outside it should know about!”

With guaranteed funding, PubAid is planning to raise awareness of how pubs support charities and their local communities, both by building on successful initiatives such as next month’s World’s Biggest Pub Quiz and the Charity Pub of the Year competition, and exploiting new areas including pubs’ support for grassroots sport.

Greg Sage, Communications Director at Greene King, said: “We’ve supported PubAid for a number of years and are happy to formalise that support with a three-year commitment.

“PubAid’s work shines a spotlight on the great work that thousands of licensees and their teams do to support national and local charities, groups and individuals, working tirelessly to keep their pub at the heart of its community. We’re delighted to be helping PubAid to spread these positive messages about pubs more widely.”

PubAid was founded in 2009 by a group of senior pub industry figures with the aim of raising awareness of UK pubs as a force for good, highlighting that they raise more than £100 million every year for hundreds of charities and local causes, and offer £40m in financial and in-kind support to grassroots sports.