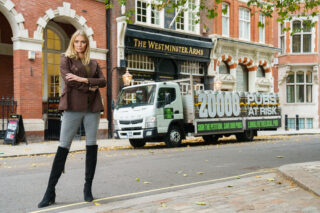 Jodie Kidd arrives at the Chancellor’s local and pub favoured by many politicians – Westminster Arms – in a lorry loaded with beer kegs, reading “20,000 PUBS AT RISK” – the number of pubs at risk if the Chancellor doesn’t support the beer and pub sector at the Budget.

Ahead of the Autumn Budget next week (27 October), Publican, model and former racer Jodie Kidd is calling on the Government to reform the unfair tax burden to help Britain’s pubs and breweries.

Following years of support for the Long Live The Local campaign – which celebrates Britain’s pubs and breweries and all that they contribute to our communities – Jodie Kidd got back behind the wheel and transported a special delivery through the streets of London. Arriving at The Chancellor’s local and pub favoured by many politicians – Westminster Arms – in a lorry loaded with beer kegs, Jodie’s message was loud and clear reading “20,000 PUBS AT RISK”, before she visited Number 10. Downing Street to hand deliver the campaign petition signed by more than 125,000 people.

The plea comes as new research reveals that if Government increases business rates back to previous levels, then up to 20,000 pubs could be at risk of business failure, putting 200,000 jobs at risk1. This would be further compounded by VAT increasing from 12.5% to 20% and the planned increase to Beer Duty. Already, according to CGA, the closure of pubs is accelerating with more than 1,000 pubs having already closed in the first half of this year – that`s 5 pubs every day!2

The initiative, supported by a wide alliance of Britain’s pubs and breweries is asking the Government for lower VAT, Beer Duty and Business Rates to help pubs and breweries not only recover from the pandemic, but also accelerate the return to growth.

Britain’s pubs and brewing sector supports 936,000 jobs, paying more than £14 billion in wages; 43% of those working in pubs are under 25s. If taxes increase further, up to 200,000 jobs could be at risk. In addition, Britain’s pubs and breweries contribute £26 billion to the economy and generate over £15 billion in tax revenues3. Despite this, the pub and brewing sector is one of the most highly taxed industries in the UK, with £1 in every £3 spent in the pub being tax4.

Jodie Kidd, Publican and Model, says: “As a publican myself, I understand just how tough it has been for pubs across the UK over the last 18 months with revenues hit hard due to Covid-19. My own pub is still only operating at 30% of 2019 trading revenue levels. The whole pub and brewing sectors recovery is still extremely fragile but next week, Rishi Sunak has the chance to secure the future of up to 20,000 pubs that are at risk of business failure by reversing his plans to increase VAT, Beer Duty & VAT. I’ve worked alongside Long Live The Local for a few years now and this year is more important than any other year. It’s not just pubs at risk, it’s livelihoods, it’s our communities and the beating heart of our country.”

David Cunningham, Campaign Director of Local Long Live Local says: “Pubs are the heart of our communities across the nation, bringing people together, and providing the largest social outreach service in the UK helping tackle social isolation and loneliness.

Although pubs fully reopened in July many are still operating at less than 90% of their 2019 trading levels and have large debts to pay and increasing costs. Despite this precarious  position, the Government is planning  to increase Beer Duty in the Autumn Budget and increase VAT & Business Rates.

They need help not only  to fully recover but to thrive in the future which is why Long Live The Local, along with the help of Jodie Kidd and 125,000 pub goers and beer drinkers are calling on the Government to lower VAT, Beer Duty and Business Rates. In return thriving pubs and breweries will help Britain level up by delivering stronger economic growth, new investment and jobs help create more connected and vibrant communities.”

To sign the petition and join the 125,000 supporters that want to reform the unfair tax burden and help our pubs and breweries recover and thrive, please visit: www.longlivethelocal.pub

About Long Live The Local:

Long Live The Local launched in July 2018 to celebrate pubs and brewing in the UK. It also raised awareness of the high number of pub closures across the UK and that the UK has one of the highest Beer Duty rates in the world.

In three years, the campaign secured over 500,000 signatures in support of a Beer Duty cut, and 285,000 emails have been sent to MPs. This helped secure three consecutive freezes in Beer Duty.

A new campaign went live in July 2021 to highlight the full return of pubs and breweries and their vital social, cultural and economic role in the UK and to ask for the reform of the unfair tax burden – specifically lower VAT and Business Rates for pubs and lower Beer Duty. This will help pubs and brewers bounce back from the COVID-19 crisis and return to growth in coming years. In turn, this growth will create more connected and vibrant communities, local investment & vital employment and ensures our rich pub and brewing heritage continues for future generations to enjoy.

Long Live The Local is backed by a wide alliance of pubs, brewers and industry bodies.

Press release from the BBPA