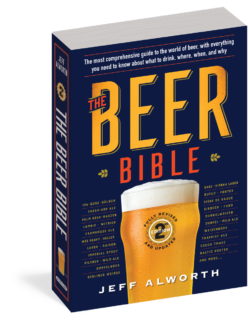 “A tome worthy of its name.” — Food and Wine
“Easily digestible for drinkers of all levels.”— Imbibe
“Pick up this book as a refresher or a gift, lest we forget that spreading beer education is just as important as advocating for good beer itself.”— Beer Advocate
“The ultimate guide.” — Sports Illustrated

Then imagine that he’s been spending the years following the first edition exploring all the changes that continue to shape and evolve the brewing world.

That’s this book, the completely revised and updated bible on beer that covers everything:

His books include: The Beer Bible (Workman), The Widmer Way (Ooligan), The Secrets of Master Brewers (Storey), and Cider Made Simple (Chronicle).

His books have twice been cited by the North American Guild of Beer Writers as Best Book, and in 2016 The Beer Bible was named best wine, spirits, or beer book by the International Association of Culinary Professionals (IACP).

He also co-hosts the Beervana Podcast, where he and Oregon State University economics professor Patrick Emerson discuss beer and the economics of beer.

For more information, to request an author interview &/or a review copy, please email mrpublicrelationsuk@gmail.com